How do you answer the question, “How long do you think I’ve got?”

Is it easier to answer difficult questions when the patient still has treatment options available?

This question is always a challenge to answer: “How long do you think I’ve got?” It can be asked at any time during the course of treatment but is most perplexing close to the end of life. Many patients will go on hospice and die at home, but sometimes, due to circumstances, they will remain hospitalized and some will die there. As the family keeps vigil one question arises nearly every time we are in the patient’s room. “How much longer do you think?” It is a question that asks for a definite response, and one that is difficult for the patient or family to ask. Once they pose the question, they may be faced with information they did not expect or truly want to hear.

Walter had advanced lung cancer and was hospitalized for altered mental status (AMS) and pain. He was half way through palliative radiation (XRT), but it was put on standby because his confusion made it impossible for him to hold still for his treatment. His delirium was disturbing to the family, yet they retained hope. If he calmed down, he could continue XRT and his condition would improve.

“Can’t we just give him anesthesia so he can go to sleep and get his treatment?” It was a simple question. More than anything, they hoped he could complete his treatment.  In order for that to occur, they focused on how to get past the hurdle of him moving during XRT. If only it were that simple.

The bigger picture was that in spite of chemo and radiation his disease had progressed to the point where he was agitated in a way that was not fixable. More radiation was not going to reverse the steady progression of his disease. He was dying, but he was strong at the same time. He pulled out his IV and repeatedly tried to climb out of bed. “See,” his son said, “he is very strong.” He was, but he wasn’t, too.

Sheila had a presumed diagnosis of pancreatic cancer. Presumed because she had not had a biopsy to confirm it. She was cachectic and too weak for treatment. Sheila said to her children and caregivers she had had a long life and did not want treatment. Her family agreed she could not tolerate treatment, yet they asked, “Don’t we need to know what exactly it is? Shouldn’t she have a biopsy?” 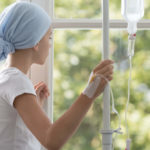