The average annual Medicaid home care expenditure for the sample of 2,578 children or youth in the Texas EPSDT program was $12,121, with a standard deviation of $17,999; expenditures ranged from a low of $110 to $174,870. Fifty-eight percent of the sample was male, and the average sample member was just older than 12 years of age.

Table 1 provides information on the inclusion criteria for the five major P/ECM categories, which were developed on the basis of the bivariate analyses. The table also displays information on additional indicators used in defining P/ECM groups. Over one-third (41%) of sample members were incontinent of bowel or bladder. One in two (50%) received some type of habilitation. The average ADL scale score was 8.62. Twenty-seven percent of the sample was classified as having a behavior problem. 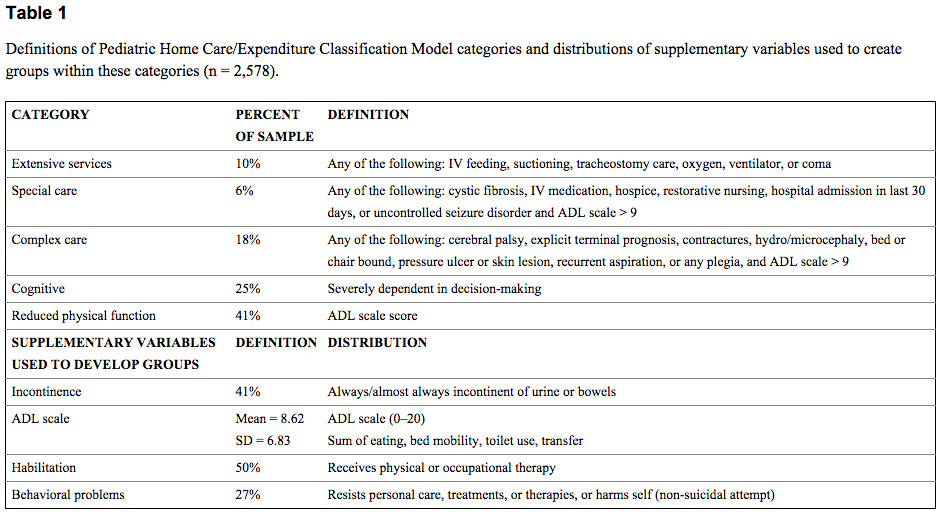 A graphical representation of the estimated P/ECM appears in Figure 1. In the figure, the five basic categories are arrayed along the left margin of the classification tree. The “branches” of the tree within each category are groups that exhibit differences in average expenditures related to the use of habilitative services, continence, behavior, or, most often, ADL status. 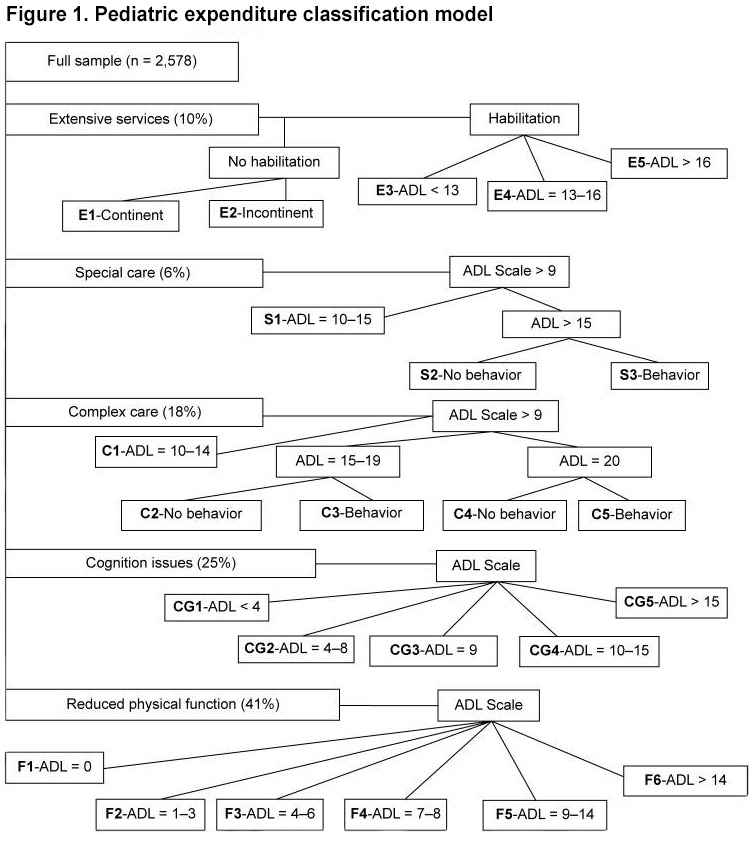 As the figure indicates, for the first category (extensive services) in the classification tree, the provision of habilitative services generated the initial splits. For other major categories, major differences in expenditures were best reflected in differences in ADL status. The presence of behavior problems played a role in defining groups in the special care and complex care categories.

Table 2 presents information on each of the 24 groups in the P/ECM. The average CMIs among the five major groups are, as hoped, monotonic:

The highest CMI (4.37) was applied to those 114 children or youth in Group E5. They were receiving habilitation services, and they scored very high on assistance with ADLs. The lowest CMIs were applied to those who did not meet the definitions of extensive services, special care, complex care, or cognitive issues. For example, those in Group F1 (CMI = 0.34) received very limited ADL assistance and had low annual expenditures and, thus, the lowest CMI.