Outcomes with anticoagulant therapy for venous thromboembolism (VTE) appear to vary by primary cancer site in patients with cancer occurring in different sites of the body in a recent study published in the journal Thrombosis and Haemostasis.1

The prospective, multinational, open-label Caravaggio study included patients with active cancer who had a symptomatic or incidental acute proximal deep vein thrombosis (DVT) or pulmonary embolism (PE). Patients were randomly assigned to treatment with either oral apixaban or subcutaneous dalteparin for 6 months. Occurrence of objectively confirmed recurrent proximal DVT or PE was the primary outcome of this noninferiority study.

Patients receiving apixaban experienced VTE recurrence at a rate of 5.6%, compared with 7.9% in those treated with dalteparin (hazard ratio [HR], 0.64; 95% CI, 0.38-1.08). VTE recurrence rates varied across cancer types. The highest rates of VTE recurrence were seen with gynecologic (10.9%) and gastrointestinal (8.8%) cancers.

Rates of major bleeding also varied across cancer types, such as 7.2% of patients with genitourinary cancer compared with 4.8% of patients with gastrointestinal cancer or lower rates for other cancer types. The researchers noted that differences in major bleeding rates across cancer types may have related to specific cancer treatments, in addition to biological heterogeneity or other medications. Apixaban and dalteparin were associated with similar rates of major bleeding across the study population (3.8% vs 4%, respectively; HR, 0.84; 95% CI, 0.41-1.71). 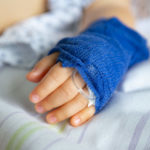 Preoperative Antibiotics Did Not Reduce CRBSIs in Pediatric Patients With CVADs