Fosaprepitant as antiemetic prophylaxis during treatment with moderately and highly emetogenic chemotherapy appears to be safe, efficacious, and feasible in pediatric patients with hematologic malignancies who are younger than 12 years, according to results from a retrospective study. Researchers from Germany reported at the 2017 American Society of Hematology Annual Meeting (ASH 2017) that a combination prophylaxis with fosaprepitant may be superior to ondansetron, with fewer pediatric patients experiencing vomiting.

The researchers found that a combination prophylaxis with fosaprepitant resulted in an 11-fold lower rate of vomiting events in chemotherapy-induced nausea and vomiting (CINV) in the acute phase and a 4-fold lower rate in delayed CINV.

Antiemetic prophylaxis with a combination of ondansetron, corticosteroids, and aprepitant were previously shown to produce favorable results in adults compared with ondansetron and corticosteroids alone. However, there has been little investigation in pediatric populations. Semjon Willier, MD, who is with Dr von Hauner Children’s Hospital at Ludwig-Maximilians-University, Munich, Germany, and colleagues conducted a retrospective single-center analysis with 79 pediatric patients. The children ranged in age from 8 months to 18 years (median, 8 years) and they all received either fosaprepitant (3.5 to 4 mg/kg [maximum 150 mg])/ondansetron combination prophylaxis or ondansetron only.

The groups were analyzed for occurrence and frequency of vomiting. They were also evaluated for an additional need for dimenhydrinate medication and drug-related clinical (exanthema, sweating, fever, loss of appetite, diarrhea, constipation) and laboratory (increases in ALT, AST, bilirubin, creatinine, urea; decreases in calcium, potassium, sodium) side effects.

The number of patients needing additional medication with dimenhydrinate, and more importantly, the total number of administered dimenhydrinate doses were significantly higher in the control group (69.2% vs 47.5% in the fosaprepitant group). No significant differences in clinical side effects were reported.  In addition, there were no significant changes in laboratory parameters between the 2 study groups. The authors state that larger, randomized, prospective trials with pediatric patients are warranted to further validate these findings. 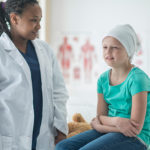