Treatment options
Treatment is aimed at managing the obstruction as well as the underlying diagnosis. It will also be influenced by the severity of symptoms and the type of tumour. Immediate management includes assessment of the patient’s airway, breathing and circulation. It is advisable to sit the patient upright and administer oxygen if indicated. Most patients are prescribed dexamethasone 8mg twice a day, together with a proton pump inhibitor for gastric protection, although there are no published studies to show the effectiveness of steroids in this situation.

If there is a suspicion of a lymphoma, steroids should be avoided if possible until a biopsy has been performed. This is because lymphomas can be very sensitive to steroids and the chance of obtaining a tissue diagnosis may be compromised. 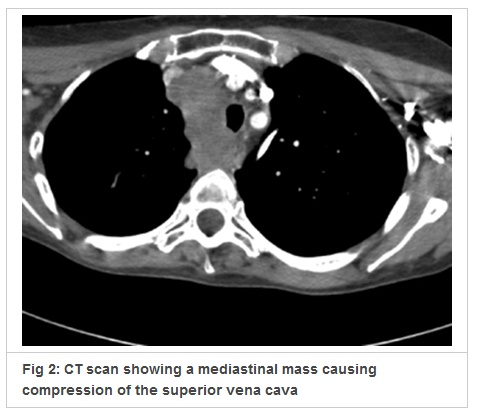 Stenting
Stenting for SVCO is minimally invasive and involves inserting a catheter into a large vein, usually in the groin, and passing it into the narrowed area under radiological guidance. The stent is placed to bridge the narrowed area and relieve the obstruction.

There is evidence that suggests about 95 per cent of patients obtain relief of their symptoms after stenting. The response is more rapid than that seen with radiotherapy or chemotherapy, symptoms usually resolving within 48 hours of stent insertion. It is a safe procedure when carried out by a trained operator. The risks are rare, but include perforation or rupture of the vena cava, stent migration, and embolisation. These risks are increased if anticoagulation is used. Patients may experience transient chest pain following the procedure and occasionally require blood transfusion.2

Radiotherapy
If it is not possible to stent patients with non-small cell lung cancer, radiotherapy can be considered as first-line treatment. The radiotherapy treatment field aims to cover the site of obstruction and as much of the primary tumour as possible. Large radiation fields are associated with increased toxicity and this can limit the volume of tissue that can be treated.

Radiotherapy in patients with lung cancer is usually palliative, so the dose and duration of treatment depend on the patient’s fitness and the extent of the disease. Treatment is usually given daily over one or two weeks, but shortened treatment regimens can be used in frail elderly patients.

Common radiotherapy side-effects include sore skin, cough, tiredness, and dysphagia. Relief of symptoms should begin about 72 hours later, but may take up to 14 days.