When large quantities of tumor cells are killed (lysed) during cancer treatment, they often release their contents into the bloodstream, causing a condition known as tumor lysis syndrome (TLS). The drug rasburicase is used to combat hyperuricemia, excess uric acid buildup in the blood as a result of tumor cell death. However, rasburicase can cause severe side effects in patients with glucose-6-phosphate dehydrogenase (G6PD) deficiency.

In these patients, rasburicase can cause hemolytic anemia, a dangerous condition in which red blood cells are prematurely destroyed and removed from the bloodstream. An article published in the Journal of Hematology Oncology Pharmacy discusses potential approaches to managing rasburicase induced hemolytic anemia.

Typically, hemolytic anemia can be resolved in patients with G6PD deficiency by discontinuing rasburicase use, but requires some additional supportive measures such as red blood cell transfusion and/or oxygen supplementation. Rasburicase use in G6PD-deficient patients may also induce methemoglobinemia, a condition in which methemoglobin, an oxidized form of hemoglobin, drastically increases. This increase in methemoglobin causes oxygen to bind more tightly resulting in decreased distribution of oxygen to tissues that could cause alerted mental status, dyspnea, and cyanosis.

The authors recommend against methylene blue use if methemoglobinemia is present, as it may exacerbate hemolysis. Lastly, although corticosteroids are a must in combating autoimmune hemolytic anemia, they are ineffective against nonimmune related hemolytic anemia, such as that caused by rasburicase in G6PD-deficient patients.

The authors recommend prevention by testing patients for G6PD status. However, the ideal time to test G6PD status may exceed the time needed for prompt rasburicase treatment, which continues to be an unsolved clinical conundrum. 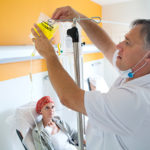