Women with gynecologic cancer who underwent a combined nurse- and peer-led intervention designed to alleviate psychological distress prior to undergoing pelvic radiation therapy (RT) were significantly more prepared for RT compared with those who received usual care. They were also less likely to have unmet supportive care needs related to sexuality. These results of a randomized-controlled trial were published in Gynecologic Oncology.

Although RT is an important component of treatment for many types of gynecologic cancers, particularly in curative settings, the treatment is associated with severe detriments in quality of life (QOL), including increased anxiety levels and sexual dysfunction.

In this study (PeNTAGOn; ACTRN12611000744954), women with gynecologic cancers scheduled to undergo RT with curative intent were randomly assigned 1:1 to intervention and control groups. The intervention was a tailored consultation with a nurse specialist followed by telephone support from a trained peer who had undergone RT for a similar diagnosis at least 2 years previously. Usual care consisted of information provided by the treatment team along with a related educational booklet. Patients were stratified according to treatment facility and treatment type.

The primary study endpoint was the pattern of change in self-reported levels of psychological distress from baseline to immediately prior to RT and then 4 weeks after RT as measured by the Hospital Anxiety and Depression Scale (HADS) score.

Secondary study endpoints included preparation for treatment immediately prior to RT and supportive psychosocial needs at 4-weeks posttreatment, as well as levels of psychological distress, psychosexual functioning, and vaginal self-care at 6- and 12- months following RT. In addition, presence of vaginal stenosis was assessed through physical examinations performed at baseline and 3-, 6-, and 12-months post-RT.

A key finding was that the primary study endpoint was not met; the patterns of change over time in levels of psychological distress covering the period from baseline to immediately prior to delivery of RT and then 4-weeks following RT were similar when the 2 study arms were compared (P =.15).

Furthermore, over time, sexually related supportive care needs decreased significantly in the intervention group (P =.03), but increased significantly in the control group (P =.007). In addition, compared with the control group, more women in the intervention group were performing pelvic floor muscle exercises at 4 weeks and 6 months post-RT (both P =.029).

Nevertheless, regarding other secondary study endpoints, the patterns of change with respect to cancer-specific QOL, psychosocial function, symptom distress, and levels of vaginal stenosis did not differ significantly on follow-up when the 2 study groups were compared. Also, use of vaginal dilators and vaginal moisturizers/creams was similar in the 2 study groups.

The researchers found no evidence that a nurse- and peer-led intervention had a beneficial effect on psychological distress compared with usual care. “However, treatment readiness, health system/informational and sexual needs and adherence to vaginal self-care were improved for women receiving additional support, indicating that the current provision of [usual care] may be deficient in these areas,” they concluded. 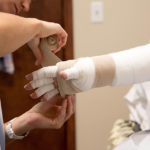