B pertussis, a gram-negative aerobic, pleomorphic coccobacilli, is known to cause whooping cough, which is a respiratory tract infection characterized by paroxysmal cough.6-9 B pertussis is transmitted by large droplets produced during coughing, sneezing, or talking. These droplets generally travel fewer than 3 feet and can be deposited on mucosal surfaces of susceptible individuals.10 B pertussis belongs to the Bordetella genus, which now includes 9 species, and B pertussis, B parapertussis, and B bronchiseptica are the 3 most studied.11

Infection is initiated by the attachment of B pertussis to the cilia of epithelial cells of the upper respiratory tract. Evasion of host defenses is facilitated by adenylate cyclase toxin (CyaA) and pertussis toxin.12 CyaA enters the neutrophils and catalyzes the excessive production of cyclic adenosine monophosphate, which intoxicates the cells such that phagocytosis is compromised. Similar to CyaA, pertussis toxin adversely affects phagocytosis and inhibits the migration of lymphocytes and macrophages to areas of infection.12 Local tissue damage of the ciliated epithelial cells may be due to tracheal cytotoxin, dermonecrotic toxin, and perhaps CyaA.12

Cough is one of the most common complaints among patients with B pertussis infection.23 Diagnosis can be made by PCR assay because it is a rapid, efficient, and specific technique with superior sensitivity compared with that of culture.24-26

Five other cases have been cited in the literature of pertussis in patients with cancer and a mix of hematological malignancies and solid tumors (Table 1).15,27-30 It is worthy of note that these cases were published prior the advent of PCR assay and several were based on culture of the organism from extrapulmonary sources (eg, blood, empyema fluid).15,27-30 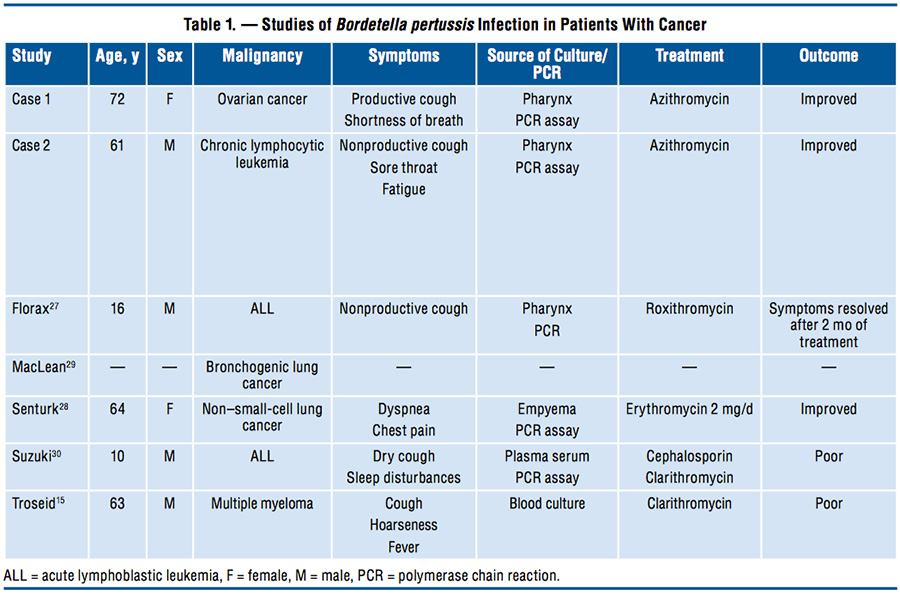 The recommended antimicrobial agents for the treatment or chemoprophylaxis of pertussis in patients who are immunocompromised or immunocompetent are azithromycin, clarithromycin, and erythromycin.31 Trimethoprim/sulfamethoxazole can also be used.32 Erythromycin, clarithromycin, and azithromycin are preferred for the treatment of pertussis in persons who are at least 1 month of age.31 For infants younger than 1 month of age, azithromycin is preferred for postexposure prophylaxis and treatment because azithromycin has not been associated with infantile hypertrophic pyloric stenosis, unlike erythromycin.33,34 Azithromycin should be used with caution because it is associated with prolongation of the QT interval.35 For patients allergic or intolerant to these agents, doxycycline or levofloxacin is an alternative option (rather than no treatment).35 If symptoms do not improve after a trial of macrolides, then resistance should be suspected.36,37 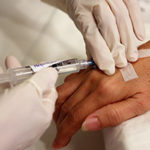 Managing Toxicity Risks of Dose-Dense Chemotherapy in the Obese