An antiscarring paste halted the fibrosis caused by the radiation used in cancer therapy when applied to the skin of mice. These early findings were published in the Journal of the Federation of American Societies for Experimental Biology, or FASEB (doi:10.1096/fj.15-280388).

Scarring occurs as key cells lay down tough connective tissue to provide a framework for healing after injury. Fibrosis is a related process that creates connective tissue in the wrong context, often interfering with the architecture or function of tissues as part of disease.

This study addressed a type of fibrosis called radiation dermatitis. The adverse effect is experienced by as many as 95% of patients undergoing initial radiation treatment. Radiation applied to the skin causes the buildup of fibrotic tissue and skin thickening. The effects may be severe enough in some patients that treatment is disrupted.

The research team mimicked the development of radiation dermatitis by exposing the mice’s skin to a single dose of 40 Gray. A similar amount of radiation to what patients typically receive over 5 weeks of anticancer radiation treatment..

Some of the irradiated animals were normal mice, and others were genetically engineered to lack the protein receptor adenosine A2A receptor. Signaling molecules fit into certain receptors on cells, similar to keys into locks, to pass on messages, and the A2A receptor does so in pathways related to fibrosis.

Half of the irradiated mice were then treated daily with a topical paste made with the research team’s patented A2A receptor blocker. The paste contains 2.5 mg of active ingredient per mL of 3% carboxymethyl cellulose, a gum binder used to make drugs and other products. The rest of the mice received a placebo.

One month after exposure, the normal mice that were given the placebo showed a nearly 2-fold increase in the amount of collagen, skin thickness, and fibrosis. Those treated with the A2A receptor-blocking paste accumulated only 10% more skin-thickening collagen. The genetically engineered mice that lacked the A2A receptor developed no skin reaction at all to the radiation.

“Our latest study is the first to demonstrate that blocking or deleting the A2A receptor can be useful in reducing radiation-induced scarring in skin,” said Bruce Cronstein, MD, director of NYU Langone’s Clinical and Translational Science Institute, and a rheumatologist and senior investigator in the study.

Cronstein adds that the team’s findings suggest that A2A antagonist drugs could also be used to treat other diseases that induce changes in the structure of collagen, a major component of skin and connective tissues, such as scleroderma and interstitial pulmonary fibrosis.

Few drugs are currently available to treat fibrosis, and they are not very effective. Furthermore, the advantage of using a topical formulation is adverse systemic reactions, such those experienced with oral drugs, can be avoided. 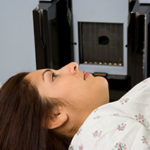