The tumor-killing radiation doses that can be delivered via traditional external-beam photon or gamma radiotherapy have long been limited by patient morbidity associated with the irradiation of healthy tissues. The promise of proton beam radiotherapy stems from protons’ dose distributions, which allow more precisely targeted, escalated-dose irradiation of tumor tissues while reducing doses to nontarget tissues. The large mass of charged particlelike protons reduces beam broadening and side scatter along beam pathways compared with that seen with other external-beam radiotherapies, for example. And along beam paths, protons’ Bragg peak distributions are very narrow, delivering very little radiation to skin at the beam-entrance site or tissues behind or below target tissue.1 Those dose distributions offer an appealing alternative to other modalities, particularly, it has been argued, for children or young adults, for whom secondary cancers are a significant concern.1-3 But proton therapy facilities are expensive, with initial set-up costs of approximately $225 million.2 Patient-specific beam-shaping brass apertures used in proton therapy also drive up costs—up to $2,550 per aperture.3

MULTILEAF COLLIMATORS SAVE TIME AND MONEY

Now, a complex computer-modeling study published in the December 2011 issue of Medical Physics suggests the resulting ambient neutron radiation doses could reach 100 µSv per hour on the patient’s side of the proton beam collimator and 27 times higher than that upstream of MLCs. The team’s model predicts secondary neutron doses to patients to be at least 1.5 times higher when tungsten MLCs are used than will be the case with brass apertures, and the upstream ambient radiation dose to be 220 times higher for tungsten than brass.3

What’s more, the team found the buildup of residual neutron activity induced by proton fields is much steeper over time for tungsten than brass, requiring prolonged storage for activity cooling.3 That could become a significant occupational-exposure issue at centers with large patient populations, according to the study’s authors at Indiana University School of Medicine and the Indiana University Health Proton Therapy Center (formerly the Midwest Proton Radiotherapy Institute) in Bloomington.

Although based on a worst-case scenario of a fully closed tungsten MLC, these predicted doses could lead to an accumulated dose for radiotherapy staff that may exceed the occupational maximum permissible dose of 50 µSv/yr, the authors concluded.3 “The transfer of the tungsten MLC technology from megavoltage photon beams to proton therapy should be carefully examined in the context of secondary neutron yield from the collimator and associated secondary cancer risk,” the team reports.3 “Usage of tungsten MLC in [the proton beam therapy] clinic may create unnecessary risks associated with secondary neutrons and induced radioactivity for patients and staff, depending on patient load.”

There is “very little staff can do” about the predicted ambient neutron radiation dose, according to co­author Indra J. Das, PhD, Director of Medical Physics for Indiana University’s Department of Radiation Oncology and the Indiana University Health Proton Therapy Center. “It is the poor selection of material,” Das told Oncology Nurse Advisor. “When designing MLC, one has to choose low atomic number materials.”

From the February 01, 2012 Issue of Oncology Nurse Advisor 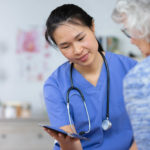