(HealthDay News) — Starting palliative care shortly after an incurable cancer diagnosis helps patients cope and improves their quality of life, according to a study presented at the American Society of Clinical Oncology’s annual Palliative Care in Oncology Symposium, held from Sept. 9 to 10 in San Francisco.

The new study included 350 patients recently diagnosed with incurable lung or gastrointestinal cancer. They were randomly assigned to one of two care groups. One group received early palliative care integrated with cancer care. The other received cancer care alone. The patients were evaluated at 12 and 24 weeks after diagnosis.

“What we found was the patients who received early palliative care were more likely to use adaptive coping strategies — meaning they were more likely to take some action to make their lives better as well as to accept their diagnosis,” lead author Joseph Andrew Greer, Ph.D., of Massachusetts General Hospital in Boston, said in a news release from the American Society of Clinical Oncology. “Palliative care is a key ingredient to improving a quality of life, which is important to both patients and their families.” 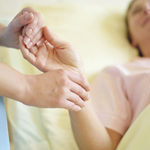