Physical examinations evaluate for muscle wasting, edema, and ascites. Cachexia-related muscle wasting is often noted in the temporal area, arms, and legs. Muscle wasting occurs in obese patients; however, it may be more difficult to recognize.

Biochemical and laboratory tests including serum and urinary tests complete the nutrition assessment of the patient. Visceral protein is generally used to monitor protein status. Albumin, often used to monitor protein status, is considered a poor indicator of protein stores due to its long half-life (20 days). Albumin is also affected by hydration status. Prealbumin is considered a more reliable marker because its half-life is 2 to 3 days. Laboratory tests also identify micronutrient deficiencies.

Total parenteral nutrition is known to be effective in cases of malnutrition in patients who do not have cancer. However, TPN has not been shown to positively affect the nutritional status in patients with cancer.2 This is due in part to the metabolic changes associated with cancer.

Malnutrition places patients with cancer at greater risk for complications associated with surgery, chemotherapy, and radiation therapy. Increased caloric provisions from PN should help reverse the effects of malnutrition and promote better response to treatments. PN has been shown to slow protein catabolism and reverse visceral protein loss at times; however, repletion has not effectively translated to clinical benefit.6


Chemotherapy is associated with a number of insults that impact nutrition status including nausea, vomiting, mucositis, gastrointestinal dysfunction, and learned food aversions. These symptoms cause further nutrition decline in already compromised patients and can lead to increased morbidity and mortality during treatment.

A review of trials of TPN and chemotherapy indicates little difference in clinical outcome and had little effect on maintaining body composition.7,8 Weight gain associated with TPN therapy was due to the accumulation of body fat and not an increase in lean body mass.

PN IN PATIENTS WITH ADVANCED CANCER

The use of PN and home PN in patients with advanced cancer remains controversial. The ASPEN guidelines state: “The palliative use of nutrition support in cancer patients is rarely indicated.”12 However, for patients with cancer and their families, severe anorexia and resultant weight loss produce great anxiety and stress. Parenteral nutrition, home PN in particular, can provide some sense of relief that the patient is receiving some nutrition. It cannot reverse cancer-related cachexia because cachexia is mediated by chronic disease inflammatory factors. A recent study revealed that home PN adminstration seems to relieve anxiety because patients are receiving attention from health care aides.13 PN serves as a palliative measure for certain advanced cancer patients.

Palliative care promotes symptom management and quality of life for terminal patients. A patient with a terminal cancer may no longer be a candidate for treatment; however, the patient may have weeks, perhaps months, to live. Several studies on survival rates of patients with advanced cancer noted extended survival improved for patients on home PN.13,14 One study of ovarian cancer patients with short bowel obstruction treated for 75 days showed improvement with home PN vs pre-home PN rates.13 Another study of cancer patients with GI obstruction revealed a longer survival rate, up to 1 year, and improved quality of life after cessation of active therapies.14


In the palliative setting, PN can extend survival; however, it is associated with risks such as line infections, fluid and electrolyte imbalances, and liver and pancreatic issues. There are general guidelines suggested for the use of PN in patients with advanced cancer.15 First, standard oral diet or enteral nutrition is always the preferred form of nutrition. PN should only be used in patients with a nonfunctioning GI tract, if death will occur from starvation earlier than it would from disease progression, and the patient has a life expectancy of at least 2 to 3 months. Finally, parenteral nutrition improves quality of life for the patient in the last part of life. PN administration to patients with advanced cancer presents ethical and moral considerations that should be carefully considered when deciding on the care plan for cancer patients in the final stages of life. ONA 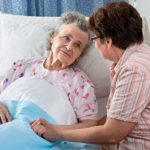