Background: The American Society of Clinical Oncology and the Oncology Nursing Society have issued guidelines stating that the vital signs of patients should be routinely checked on days that intravenous chemotherapy is administered. This study sought evidence to justify this approach.

Conclusion: This study suggests a need for additional, evidence-based data to support the routine checking of vital signs prior to administering cancer chemotherapy.

The American Society of Clinical Oncology and the Oncology Nursing Society have issued joint guidelines stating that the vital signs (blood pressure, pulse, respiratory rate, and temperature) of patients with cancer should be routinely and consistently checked on the day that intravenous chemotherapy is administered.1 Yet, to our knowledge, data to justify — or refute — this recommendation are lacking.

At least 2 factors point to the need to investigate the value of checking vital signs prior to the administration of intravenous chemotherapy in patients with cancer. In the nononcological setting, this issue is an important focus of ongoing research. Storm-Versloot et al2 performed a meta-analysis of the routine monitoring of vital signs in hospitalized patients and observed that, among 15 studies (N = 42,565 patients), conclusions were highly mixed. The investigators noted that studies appeared flawed and suggested a need for rigorous research “specifically intended to investigate the clinical relevance of routinely measured vital signs.”2 In addition, health care professionals are beginning to question the role of routinely checking vital signs of patients in nononcology settings, a finding that suggests similar questioning should occur in oncology settings.3-5 In view of a paucity of data on this topic in the oncology setting, the need to establish a role for the routine checking of vital signs prior to the administration of chemotherapy is important.

Second, checking vital signs prior to the administration of chemotherapy has enormous, onerous implications. If one assumes that checking vital signs takes about 5 minutes and if one works in a chemotherapy unit that treats approximately 150 patients per day, as is currently the case at the Mayo Clinic (Rochester, Minnesota), checking vital signs requires at least 1 full-time staff member whose only task is to check patient vital signs. Thus, acquiring evidence to support or refute the importance of this practice offers more than academic interest and is in keeping with Elshaug et al,6 who describe that a “groundswell of activity is seeking to identify and reduce the use of health care service that provide little or no benefit — whether through overuse or misuse.”

Thus, the primary goal of this 2-institution study was to generate and analyze data to better understand whether the routine checking of vital signs prior to the administration of intravenous chemotherapy is associated with fewer complications — specifically, with lower rates of emergency department (ED) visits and hospitalizations.

This study was undertaken at the Medical College of Wisconsin (Milwaukee, Wisconsin) and the Mayo Clinic. The Institutional Review Board of each institution reviewed and approved the study protocol prior to data acquisition and analyses. These institutions were chosen because, historically, one routinely checked vital signs prior to the administration of chemotherapy (the former) and the other did not.

An ED visit, hospitalization, or death during the first cycle of chemotherapy was considered a complication, which was the primary end point of the study.

Both institutions incorporated routine clinical assessment prior to the administration of chemotherapy on days when a prescribing health care professional had not seen the patient. This prechemotherapy nursing assessment consisted of asking patients about their general well-being and about specific signs and symptoms such as fever, fatigue, nausea, and vomiting. Concerns raised during the nursing assessment could conceivably trigger a vital-sign check based on clinical judgment and the temporal incidence and severity of the signs or symptoms.

Rationale for Focusing on Patients Treated With Gemcitabine

This study focused on patients with cancer about to receive their first cycle of gemcitabine-based chemotherapy. Pharmacy records were used to identify patients. The rationale for focusing on gemcitabine-treated patients is as follows: (1) gemcitabine is typically administered on day 8 in the chemotherapy cycle, and this day often does not entail a visit with a prescribing health care professional who likely would have checked vital signs as part of a routine physical examination, (2) this chemotherapy agent is used to treat a variety of cancers, leading to greater generalizability of findings, and (3) the adverse events of this agent are characteristic of those observed with classical, conventional chemotherapy (nausea, vomiting, myelosuppression, diarrhea), a profile that leads to greater generalizability of findings. We decided to focus on the first cycle of gemcitabine- based chemotherapy alone because the risk of adverse events generally increases with subsequent cycles, and this restriction would potentially enhance the homogeneity of the study population.

In calculating sample size, the study team estimated that approximately one-third of study patients would have had their vital signs routinely checked based on the anticipated patient representation from the Medical College of Wisconsin. Based on prior reported rates of adverse events in clinical trials, 5% of patients who had their vital signs checked were estimated to have a major complication during their first dose of gemcitabine- based chemotherapy. We estimated that this rate would increase to 10% in the absence of checking vital signs; this 5% effect size was derived from other clinical settings in which this increased complication rate approximates the upper limit of acceptability.7-9 We estimated that a target sample size of 1,015 study patients would enable us to detect the above with 80% power, assuming a 2-sided significance level of .05.

Analyses consisted of direct comparisons of complication rates between study patients who did and did not have their vital signs checked at specific time points. If chemotherapy was not administered on a particular day, then the complication data from that study patient were still included in the analyses relevant to that day. For univariate and multivariate analyses, logistical regression models were constructed to determine which variables were associated with ED visits and hospitalizations (in the event of a very low complication rate [eg, low death rate], this analysis was not performed). A 2-sided P value of less than .05 was considered statistically significant. Statistical analyses were performed using SAS version 9.3 (SAS Institute, Cary, North Carolina) and JMP software (SAS Institute).

We reviewed the medical records of 1,158 study patients. Vital signs were checked for 589 study patients on day 1 and for 486 study patients on day 8. Based on whether vital signs had been checked, patient characteristics were similar, although cancer type, number of drugs administered, and whether patients received adjuvant treatment or treatment for metastatic cancer differed between groups, at times, based on vital-sign assessment and institution (Table 1). 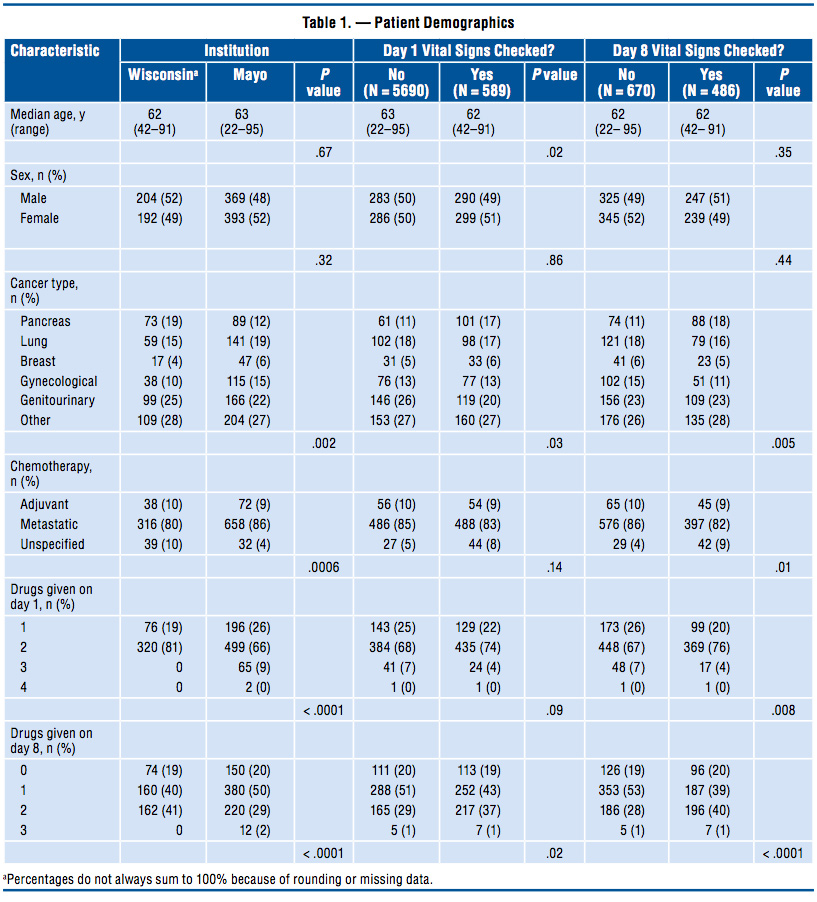 A total of 148 study patients (12.8%) were evaluated in the ED, 145 (12.5%) were hospitalized, and 11 (0.9%) died during their first cycle of chemotherapy. Subgroup analyses found no statistically significant differences in these complication rates based on institution, except for a trend toward a greater number of ED visits in patients from the Medical College of Wisconsin: 60 visits (15%) compared with 88 visits (12%; P = .08). 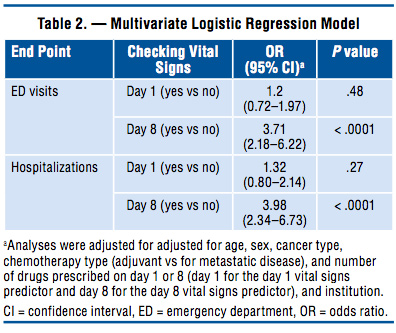 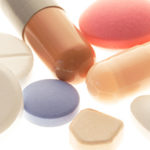