A retrospective review of clinical data on 145 patients with stage I-III rectal cancer indicates that patients with a complete response, defined as complete disappearance of the tumor after treatment with chemoradiation and systemic chemotherapy, had similar 4-year survival rates regardless of whether they had immediate surgery or pursued a watch-and-wait surveillance approach.

The findings add to growing evidence suggesting that, with frequent follow-up examinations after initial chemotherapy and radiation, select patients with rectal cancer can achieve excellent outcomes while avoiding the risks and complications of rectal surgery. The study was presented at the 2015 Gastrointestinal Cancers Symposium in San Francisco, California.

“We believe that our results will encourage more doctors to consider this watch-and-wait approach in patients with clinical complete response as an alternative to immediate rectal surgery, at least for some patients,” said senior study author Philip Paty, MD, a surgical oncologist at the Memorial Sloan-Kettering Cancer Center in New York, New York.

“From my experience, most patients are willing to accept some risk to defer rectal surgery in hope of avoiding major surgery and preserving rectal function.”

He suggested that those patients are potential candidates for the watch-and-wait approach. By avoiding rectal surgery, patients are spared its risks, including impaired bowel and sexual function, which can substantially diminish quality of life.

In the present report, researchers retrospectively analyzed data that were collected at Memorial Sloan-Kettering Cancer Center between 2006 and 2014. Patients with stage I-III rectal cancer who received radiation and chemotherapy (neoadjuvant therapy) and who experienced complete tumor regression were either followed by watchful waiting (nonsurgical management) or underwent rectal surgery.

Patients undergoing the watchful-waiting approach were initially followed at 3- to 4-month intervals by digital rectal and endoscopic examinations and at 6-month intervals by cross-sectional imaging. Median follow-up in this report is 3.3 years.

In a nonrandomized comparison, researchers found that the outcomes achieved in this group of patients were similar to the outcomes of 72 patients who underwent standard rectal surgery and experienced a pathologic complete response (no viable cancer cells found on microscopic examination of surgically removed tissue): the 4-year overall survival rate was 91% in the no-surgery group vs. 95% in the standard-surgery group. No significant differences were noted in the number of distant recurrences between the two groups.

According to the authors, this is one of the largest experiences of its kind, building on prior evidence from research conducted in Brazil and the Netherlands. Nonsurgical management of rectal cancer is becoming increasingly accepted as a standard option worldwide. A prospective phase II study has recently begun enrolling patients at 20 institutions across the United States, and nonsurgical management will be offered to patients whose tumors fully disappear after initial chemotherapy and radiation.

This work was supported in part by funding from the Berezuk Colorectal Cancer Fund. 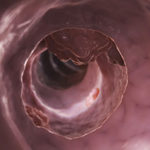