An algorithm dubbed ENVE could be the Google for genetic aberrations. Just like the World Wide Web before Google, extraordinary amounts of information are available, but tools have been lacking to reliably secure relevant results.

ENVE, which stands for Extreme Value Distribution based Somatic Copy-Number Variation Estimation, is designed to sort through what the researchers refer to as white noise and actual signs of trouble. More specifically, the algorithm aims to eliminate once-common false-positives or -negatives and instead reveal areas where genetic changes have gone awry. This new degree of guidance could translate to more effective treatments for multiple kinds of cancer, as well as other conditions.

As part of their efforts, Guda and his colleagues tested the approach on two sets of colorectal cancer tissue samples: one consisting entirely of whites and the other of African Americans. In the United States, rates of colon cancer incidence and death are higher in African Americans than in any other racial or ethnic group.

First, the researchers compared the ENVE model to an existing state-of-the-art algorithm, and found ENVE consistently outperformed its rival. Next they looked at differences between the two racial groups; while the major genetic changes were similar, there were also regions where they differed.

The researchers specifically applied ENVE to detect copy number alterations in DNA, the molecule that provides genetic instructions to each cell in the body. DNA has the ability to replicate itself so that new cells get the appropriate orders; however, the copies are not always exact replicates. Some DNA copy-number alterations, which are structural deviations in the DNA duplication, can give rise to cancer or other illnesses.

“Now we have a background noise modeling framework that can distinguish between deviations in tumor sequencing data that arise due to inherent noise versus those that arise due to real copy-number alterations in the tumor DNA,” said lead author Vinay Varadan, PhD, assistant professor, Case Comprehensive Cancer Center.

Guda calls Varadan’s mathematical framework “an ingenious application” of a probabilistic method previously used in modeling weather patterns and financial markets and applying that method to interpret copy-number alterations in tumor exome sequencing data. The idea is to distinguish between the variations arising due to the technical inconsistencies from those due to actual copy-number changes in tumor DNA.

“What makes our algorithm particularly robust is that it works without fixed, user-defined criteria that are often arbitrary. All that is required for ENVE is 15 to 20 normal tissue samples processed on the same sequencing platform to quantify the extent of inherent noise in the platform,” Varadan said. 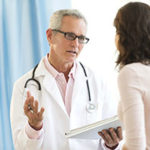