Scientists have known for decades that cancer can be caused by genetic mutations, but more recently they have discovered that chemical modifications of a gene can also contribute to cancer. These alterations, known as epigenetic modifications, control whether a gene is turned on or off. A team of chemical engineers has now developed a fast, reliable method to detect this type of modification, known as methylation, which could offer a new way to choose the best treatment for individual patients.

Analyzing these modifications can provide important clues to the type of tumor a patient has, and how it will respond to different drugs. For example, patients with the brain tumor glioblastoma respond well to alkylating agents if the DNA-repair gene MGMT is silenced by epigenetic modification.

“It’s pretty difficult to analyze these modifications, which is a need that we’re working on addressing. We’re trying to make this analysis easier and cheaper, particularly in patient samples,” said senior author Hadley Sikes, PhD, the Joseph R. Mares Assistant Professor of Chemical Engineering at Massachusetts Institute of Technology in Cambridge. The technique was described in the Analyst (2014; doi:10.1039/C4AN00667D).

After sequencing the human genome, scientists have turned to the epigenome. The epigenome consists of the chemical modifications, including methylation, that alter a gene’s function without changing its DNA sequence.

In some cancers, the MGMT gene is turned off when methyl groups attach to specific locations in the DNA sequence. Those locations are cytosine bases that are adjacent to guanine bases. When this happens, proteins bind the methylated bases and effectively silence the gene by blocking it from being copied into RNA.

“This very small chemical modification triggers a sequence of events where that gene is no longer expressed,” Sikes said.

Current methods for detecting cytosine methylation work well for large-scale research studies, but are hard to adapt to patient samples, Sikes explained. Most techniques require a chemical step called bisulfite conversion: The DNA sample is exposed to bisulfite, which converts unmethylated cytosine to a different base. Sequencing the DNA then reveals whether any methylated cytosine was present.

However, this method doesn’t work well with patient samples because you need to know precisely how much methylated DNA is in a sample to calculate how long to expose it to bisulfite.

Sikes’ new approach avoids bisulfite conversion completely. Instead, it relies on a protein called a methyl binding domain (MBD) protein, which is part of cells’ natural machinery for controlling DNA transcription. This protein recognizes methylated DNA and binds to it, helping a cell to determine if the DNA should be transcribed.

The other key component of Sikes’ system is a biochip, which is a glass slide coated with hundreds of DNA probes that are complementary to sequences from the gene being studied. When a DNA sample is exposed to this chip, any strands that match the target sequences are trapped on the biochip. The researchers then treat the slide with the MBD protein probe. The probe binding to a trapped DNA molecule indicates that sequence is methylated. 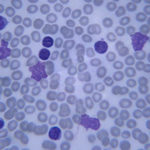