The chemical composition of commonly used chemotherapy drugs can be altered so that they only become active when they come into contact with the metal palladium, according to new research. This means that cancer patients could one day experience fewer side effects from chemotherapy since this discovery opens the door for more targeted treatments.

These possible future treatments would involve doctors placing harmless metal implants at the cancer site. The discovery could make treatment more targeted than existing therapies and avoid such unwanted side effects as hair loss, tiredness, and nausea. These occur when chemotherapy drugs carried in the blood kill healthy cells as well as cancer cells.

The researchers, from the Edinburgh Cancer Research UK Centre at the MRC Institute of Genetics and Molecular Medicine, the University of Edinburgh in the United Kingdom, hope that, by implanting small devices coated with palladium into patients’ tumors, the drugs would become activated only where they are needed, causing minimal damage to the rest of the body.

The scientists reported their discovery in the journal Nature Communications (2014; doi:10.1038/ncomms4277). The approach will first need to be tested in animals before it can be studied in patients.

The modified chemotherapy drug that activates when it comes into contact with the metal is known as a prodrug. The initial studies were done using live-cell imaging and immunoassay studies, which found that, when the prodrug was activated, it had comparable activity with the unmodified drug against colorectal and pancreatic cancer cells. The scientists found that palladium resins can be carefully implanted in the yolk sack of zebrafish embryos. There, the resins had excellent biocompatibility and local catalytic activity.

“It will be several years before we’re able to start treating patients but we’re hopeful that this approach will lead to better tolerated cancer therapies in the future,” said senior author Asier Unciti-Broceta, PhD.

Chemotherapy Side Effect Management News
Next post in Web Exclusives 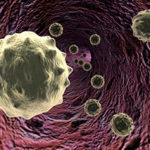