A compound initially developed as a treatment for high cholesterol not only halts the progression of breast cancer, but also can kill cancer cells. All animal cells contain cholesterol, which serves as a structural component of cell membranes.

“Because tumor cells grow rapidly they need to synthesize more cholesterol. Scientists working to cure breast cancer often seek out alternative targets that might slow or stop the progression of the disease, including the elimination of cancerous cells. We targeted the production of cholesterol in cancer cells which caused the death of breast cancer cells,” said Salman Hyder, PhD, Department of Biomedical Sciences, University of Missouri, Columbia.

Up to 70% of breast cancers in women are hormone-dependent and can be treated with antihormone medicines such as tamoxifen. Although tumor cells may respond to this type of therapy initially, most tumors eventually develop resistance to the medication, allowing breast cancer cells to grow and spread.

Cholesterol may contribute to the development of resistance to antihormone medications because cholesterol can be converted to hormones in tumor cells. Therefore, these cholesterol-forming pathways are attractive targets in the treatment of breast cancer.

When the cholesterol-lowering drug was tested in mice with breast cancer, the compound killed breast cancer cells by reducing the presence of estrogen receptors on the tumor cells.

“The compound exhibited antitumor properties in both human samples and in samples that were administered by injection into the mice,” Hyder said. “In both cases, the estrogen receptors that cause tumors to grow were eliminated, leading to more rapid cell death.”

Further clinical testing may lead to a drug with the dual properties of fighting high cholesterol and treating breast cancer that is sensitive to hormones. 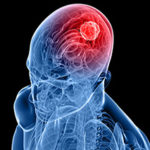 Five myths may compromise care of patients with brain metastases