Experts often say that worrying may be harmful to your health. However, when it comes to preventing skin cancer, a little fear may be good for you.

In a study published in the Journal of Behavioral Medicine (doi:10.1007/s10865-013-9538-1), researchers found that fear and worry about skin cancer had a bigger influence on people’s use of sunscreen than information about the statistical likelihood of developing the disease.

“This study is important because most of what we do in public health communications focuses on spreading knowledge and information. By failing to address emotions, we’re missing a rich influence on behavior,” Kiviniemei said.

Kiviniemi’s study analyzed data from the Health Information National Trends Survey, a nationwide telephone survey conducted by the National Cancer Institute in 2005. Nearly 1,500 randomly selected participants with no personal history of skin cancer were asked about their sunscreen use. Questions also addressed the study participants’ perceived risk and concern for developing skin cancer.

Frequency of sunscreen use varied; 32% reported never using it, and 14% reported always using it. Men and non-white participants were less likely to use sunscreen. Education was associated with increased sunscreen use.

However, worry had a stronger influence on people’s behavior than information, and a greater degree of concern was associated with higher use of sunscreen.

“Our research looked at the interplay of emotions and facts in decision making—that is, how do cognitive and affective risks jointly work to influence behavior?” said Kiviniemi. “The nature of their interrelation as an influence on behavior had not been examined until this study.”

Affective risk (fear and worry about a health issue) and cognitive risk (information) both influence  health behaviors. Often, they are treated as two separate types of risk or are contrasted as irrational vs rational influences.

“These findings show that clinicians might want to think more about feelings when encouraging people to use sunscreen,” said Kiviniemi. “In addition to providing educational information about risk, encouraging people to consider how they feel about cancer and how worried they are about it might inspire preventive behaviors.”

Public health and medical professionals can use these results to design better tools to promote healthy behaviors, although researchers are still a few steps away from understanding how to use fear so that it is beneficial, rather than paralyzing, added Kiviniemi.

Further studies are planned to examine the interactions between risk perception and behavior in other situations, such as colonoscopy screening and condom use. 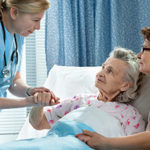 Does frailty influence the use of adjuvant hormone treatment in older breast cancer patients?