Adding to the picture of what prompts breast cancer to form, researchers have found that distant estrogen response elements (DEREs) can act independently of oncogenes to spur tumor development.

DEREs appear to be depots or hubs that remotely and simultaneously control multiple target genes in response to estrogen stimulation, said lead author Pei-Yin Hsu, PhD, of The University of Texas Health Science Center San Antonio in the paper in Cancer Cell (2013; 24(2):197-212). As such, they are prime targets for the study of novel therapies for breast cancer and could also be useful in diagnosis.

DEREs contribute to tumor development when they are multiplied or present in abnormal numbers, especially in estrogen receptor–positive breast cancers.  When more DERE copies are present, chromatin interactions are enhanced, and, in turn, tumor-suppressor and apoptosis genes are repressed. Decreasing the number of DERE copies could have therapeutic potential to treat women with this aggressive form of cancer.

The researchers analyzed two DERE clusters on human chromosomes 17 and 20. Chromosome 17q23 has been intensively scrutinized in the past because it is among the commonly amplified regions in patients whose breast cancer tumors recurred within 5 years of post-tamoxifen therapy. However, these previous research efforts found only a handful of putative oncogenes.

This research team found that DEREs, which are DNA regulatory elements within these genomic regions, induce progrowth factors and inhibit growth-suppressing genes. Hsu said, “It is worthwhile to note that DERE-DERE interactions, instead of DERE interactions with genes, may also contribute to tumor development.”

The team found a correlation between a subset of DERE-regulated genes and tamoxifen resistance. It may be possible to evaluate how a woman will respond to tamoxifen by measuring DERE activity, Hsu said.

In addition, the two DEREs that were studied could turn out to be good biomarkers for determining whether a woman will develop estrogen receptor–positive breast cancer. This study may even lead to strategies to prevent some cases of this cancer. 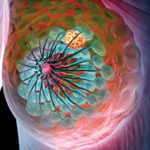