A simple questionnaire that rates breathing difficulties on a scale of 0 to 3 predicts survival in chronic graft-vs-host disease (GVHD), according to a new study.

“It’s a warning,” said Lee. “It puts us on notice to be more careful and attentive.”

GVHD is an immune reaction that occurs in some patients who have received bone marrow or blood cell transplants using donor cells. In GVHD, the transplanted cells, which will become the patient’s new immune system, attack the patient’s own cells as they would a foreign object or infection. GVHD can be either acute or chronic; severe, uncontrolled cases can be fatal.

In 2005, the National Institutes of Health (NIH) recommended assessment of lung function in patients with chronic GVHD using both pulmonary function tests and an assessment of symptoms.

The newly published study found that shortness of breath is associated with a higher risk of death overall and of nonrelapse mortality, and that worsening symptoms over time were associated with increased mortality. Researchers analyzed a total of 1,591 visits by 496 patients in multiple treatment centers.

One of the study’s findings was both surprising and encouraging: as a screening test, the simple questionnaire outperformed other tests, which the study called “encouraging”.

“The questionnaire turned out to be the most predictive,” Lee said. “It’s just a question, therefore easy to do and cost-effective. No special equipment is involved.”

The patient’s doctor would most likely follow-up a poor score with other tests, such as a CT scan, to determine the cause; although chronic GVHD should always be suspected following a transplant, it is not the cause of every problem. Medicine that suppresses the immune system is the first line of treatment for chronic GVHD.

Lee explained that a poor score can also serve as a reminder to make sure the patient has had a pneumonia vaccination and is taking other precautions. 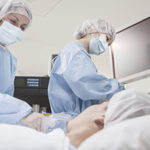 Younger men benefit most from surgery for localized prostate cancer