The study, published in the Journal of Clinical Oncology, analyzed data from two independent trials designed to examine overall survival of patients with early-stage HER2-positive breast cancer who received chemotherapy with and without Herceptin. 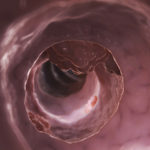