A research study based on analysis of publicly available data has found that recent marijuana use was associated with symptoms of airway inflammation, but that moderate lifetime use was not associated with clinically significant changes in measures of lung function.

Lung Cancer Smoking Substance Use
Next post in Headlines 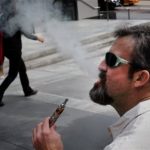