UCLA researchers have developed a program that could improve the day-to-day lives of women with breast cancer by addressing post-treatment cognitive difficulties, sometimes known as “chemo brain,” which can affect up to 35 percent of women after their treatments. 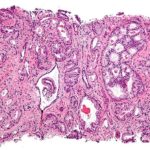