After the Institute of Medicine (IOM) released a report last month on the weaknesses of Cooperative Group cancer clinical trials, the National Cancer Institute (NCI) discussed four main measures it would take to improve the system in its May 2010 NCI Cancer Bulletin.

Many patients who qualify to participate in clinical trials do not enroll or enroll but then drop out because their insurance companies will cover a standard treatment but not a clinical trial treatment, according to the NCI Cancer Bulletin. 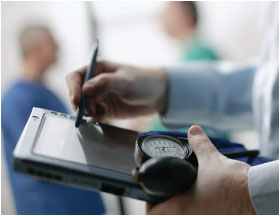 In response, 33 state governments and the District of Columbia have adopted laws that address the coverage of clinical trials or require that insurers cover them. Medicare and the US Department of Defense, through its TRICARE health insurance plan, now also cover such costs.

Despite the progress, the report noted that some issues still need to be clarified, particularly addressing some of the gaps in coverage at the state level and identifying what the term routine care encompasses.

Only 3% to 5% of adult cancer patients participate in clinical trials, but no one knows how many patients are offered the chance to participate in one, the report found.

In a 2008 study, researchers found that 75% of patients chose to enroll in a trial when they were explicitly offered one, yet only 20% out of 235 patients recorded during the study received explicit offers.

Doctors can increase communication by becoming aware of their own psychosocial barriers, such as doubt about patients’ willingness to take a randomly assigned treatment.

According to the report, more patients could participate in trials if doctors had 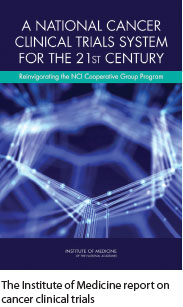 access to a system, such as tablet computers, that would help them quickly identify which patients are eligible for which trials. Training programs, such as those developed by the Education Network to Advance Cancer Clinical Trials (ENACCT), may also increase enrollment by familiarizing patients with clinical trials.

Close to 90% of those who do enroll in NCI clinical trials are white, with Hispanics and Latinos accounting for only 5.6% of that amount, the report found. This means that minority, elderly, and other underserved patient populations receive less cutting-edge care.

Enrollment in clinical trials is especially low for adolescents and young adults (AYA) ages 15 to 39 years. Inadequate health insurance, lack of access and referrals to specialized centers, and lack of physician knowledge about trials for this age group all heighten the problem.

To solve the problem, AYA patients should enroll in clinical trials created specifically for their age group that ensure pediatric treatments are not too toxic for them. Physicians can increase AYA participation by referring such patients to comprehensive cancer centers, which are most familiar with age-appropriate trials.

Despite these problems, the re­port noted that more physicians and researchers have recently begun studying AYA cancers, which translates into more clinical trials and research for this age group.

It found that physicians should also focus on recruiting adults older than 65 years, who may not enroll in trials due to lack of transportation, lack of data showing that such treatments increase survival, or previous health conditions such as diabetes that make them ineligible for trials. To improve, the bulletin noted, trials shouldn’t include prior malignancies if there is no reason not to. ONA