A high response rate was seen among patients whose metastatic castration-resistant prostate cancers had DNA-repair defects and were no longer responding to standard treatments when treated with poly(adenosine diphosphate [ADP]-ribose) polymerase (PARP) inhibition, according to a study published in the New England Journal of Medicine.

Metastatic castration-resistant prostate cancer is a diverse disease that can have genomic aberrations that interfere with DNA repair, some of which are sensitive to platinum and PARP inhibitors.

However, treatment is not based on molecular stratification. These researchers sought to prove their hypothesis that metastatic castration-resistant prostate cancer with DNA-repair defects would respond to PARP inhibition with olaparib.

They conducted a phase 2 trial including 50 patients with metastatic castration-resistant prostate cancer who had undergone prior treatments. All of the patients had received docetaxel, 49 (98%) had received abiraterone or enzalutamide, and 29 (58%) had received cabazitaxel.

For this study, the patients were treated with olaparib 400 mg twice a day. Primary end point was response rate, defined as an objective response according to Response Evaluation Criteria in Solid Tumors, version 1.1; a reduction of at least 50% in the prostate-specific antigen level; or a confirmed reduction in the circulating tumor-cell count from 5 or more cells per 7.5 mL of blood to less than 5 cells per 7.5 mL.

Next-generation sequencing identified homozygous deletions, deleterious mutations, or both in DNA-repair genes in 16 of the 49 patients (33%) who could be evaluated.

Of these patients, 14 had a response to olaparib, including all of the 7 patients who had a BRCA2 loss and 4 of 5 patients who had ATM aberrations. The most commonly reported grade 3 or 4 adverse events were anemia and fatigue.

The study findings suggest that some cases of metastatic prostate cancer can be stratified for treatment with PARP inhibitors. Those tumors that will respond to PARP inhibition are characterized by DNA-repair defects that can be identified through next-generation sequencing assays. 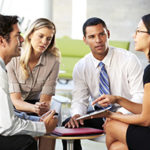