The addition of venetoclax to fludarabine, cytarabine, granulocyte colony-stimulating factor, and idarubicin (FLAG-IDA) appears to demonstrate efficacy across acute myeloid leukemia (AML) subgroups and appears to have an acceptable safety profile, according to the results of an interim analysis of a phase 1b/2 study presented by Curtis Lachowiez, MD, of the University of Texas MD Anderson Cancer Center, in Houston, at the virtual 62nd American Society of Hematology (ASH) Annual Meeting and Exposition.

“[In newly diagnosed AML], FLAG-IDA is associated with improved overall survival secondary to a decreased risk for relapse and is associated with low early death. In the relapsed/refractory population, however, we continue to see suboptimal outcomes with FLAG-IDA therapy,” said Dr Lachowiez.

Adult patients with treatment-naive/newly diagnosed or relapsed/refractory (R/R) AML were included in the study. Following the phase 1b (P1b) dose-escalation phase of the study, updated analysis of the phase 2 dose expansion also included an arm for each patient population: arm A (P2A) for newly diagnosed AML and arm B (P2B) for R/R AML.1,2

Patients with R/R AML had received a median of 2 prior lines of induction therapy (range 1-6) in the P1b arm and 1 (range 1-3) prior line of induction therapy in the P2B arm. Additionally, 50% of patients in the P1b arm and 30% of patients in the P2B arm underwent prior allogeneic hematopoietic stem cell transplantation (HSCT).

Overall, 56% of patients transitioned to HSCT, which was the most common reason for study discontinuation. In P2A, P1b, and P2B arms, transition rates were 69%, 38%, and 52%, respectively.

The toxicity profile was considered acceptable and as expected. Dr Lachowiez explained that infectious complications were most prevalent during cycle 1, while myelosuppression was prevalent during cycle 2. Overall, grades 3 and 4 adverse events occurring in 10% or more of patients included febrile neutropenia (50%), bacteremia (35%), and pneumonia (28%). The 30-day mortality rate was 0.0%. Deaths in patients while on study were due to sepsis, pneumonia, pulmonary hemorrhage, and the hemophagocytic syndrome.

Dr Lachowiez described the regimen as an excellent bridge to HSCT in R/R AML, with 46% of these patients bridged to HSCT. One-year OS in patients with R/R AML was 87%, and the 1-year post-HSCT OS was 78%.

“In conclusion, we see that [venetoclax added to FLAG-IDA] is associated with expected and acceptable toxicity profiles,” said Dr Lachowiez,” [and] resulted in impressive efficacy in both newly diagnosed and relapsed/refractory AML.” 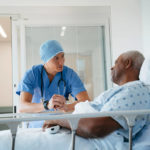