Medicare beneficiaries who are survivors of non-Hodgkin lymphoma (NHL) had significantly greater rates of non–malignancy-related hospitalizations and spending per hospitalization compared with non-cancer controls, according to a study presented at the virtual 62nd American Society of Hematology (ASH) Annual Meeting and Exposition.

“Older patients with NHL are at particularly high risk for treatment-related morbidity in addition to morbidity associated with aging,” said study presenter Kelly Kenzik, PhD, of University of Alabama at Birmingham. “The combined impact of treatment and aging can result in more complex patients, and management of these patients can present additional strain on the health care system in terms of both utilization and spending.”

Dr Kenzik and colleagues used Surveillance, Epidemiology, and End Results (SEER)-Medicare data to identify 14,533 patients who were diagnosed with NHL at 65 years or older and examined the age, race, sex, and follow-up time of these individuals in relation to comparable non-cancer controls.

They estimated the average number of hospitalizations per 100 individuals up to 1 year and 5 years. Patients had incident NHL diagnosed between 2008 and 2015 and had at least 6 months of continuous Part A and B coverage with no Medicare Advantage enrollment.

The average spending per hospitalization during the course of 5 years was higher for survivors of NHL compared with controls ($16,950 vs. $13,474).

Dr Kenzik noted that a limitation of the study was that it was based on administrative data, which are designed for billing.

The findings, she said, emphasize the need for specialized risk-based anticipatory care. 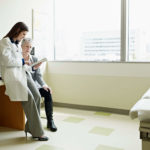