For men with localized prostate cancer, a new study suggests improved rates of noncompletion with stereotactic body radiotherapy (SBRT), rather than conventional fractionation. The study’s results were presented as part of the American Society of Clinical Oncology 2021 Genitourinary Cancers Symposium.

In the study, men with prostate cancer who were treated using primary radiotherapy were identified from the National Cancer Database. Patients were evaluated for whether they had completed radiotherapy, with benchmarks for completion based on the total fractions received using either conventional fractionation or SBRT protocols, and overall survival was also evaluated.

Disclosures: Multiple authors declared affiliations with or received funding from the pharmaceutical industry. Please refer to the original abstract for the full list of disclosures. 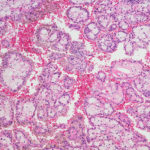