Administration of neoadjuvant nivolumab plus chemotherapy did not affect the feasibility or timing of surgery or the extent of surgical resection compared with chemotherapy alone in patients with resectable non-small cell lung cancer (NSCLC), according to the results of the CheckMate 816 study presented at the 2021 American Society of Clinical Oncology Annual Meeting.

The study included adults with stage IB-IIIA disease with an Eastern Cooperative Oncology Group (ECOG) performance status of 1 or less and no known EGFR/ALK alterations. Patients were randomly assigned to receive nivolumab 360 mg plus a platinum-doublet or chemotherapy alone. Surgery was to be performed within 6 weeks of the last treatment.

“This half hour difference in procedure time may indicate that surgical complexity was not increased by virtue of the addition of nivolumab to the preoperative treatment regimen,” Dr Spicer said.

Finally, there was no increase in the length of hospital stay when comparing the study arms. Further, the addition of nivolumab to chemotherapy did not increase surgery-related complications in this study as the complication rates were within expected ranges, Dr Spicer said.

“The safety and surgical outcome data reported thus far from CheckMate816, along with significant improvement in pathologic complete response, support nivolumab in combination with chemotherapy as an attractive neoadjuvant option for patients with resectable NSCLC,” Dr Spicer said.

Disclosure: This research was supported by Bristol Myers Squibb. Some study authors declared affiliations with biotech, pharmaceutical, and/or device companies. Please see the original reference for a full list of authors’ disclosures. 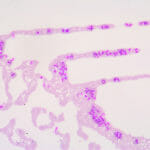