Dr Bruno and colleagues noted that for patients with advanced and metastatic NSCLC, guidelines recommend using next-generation sequencing (NGS)-based testing for biomarkers. Additionally, according to Dr Bruno and colleagues, biomarker-driven therapies are associated with better overall survival outcomes. However, racial disparities in NSCLC management and outcomes appear to exist.

The study was a retrospective analysis of data from patients obtained from the Flatiron Health Electronic Health Record database. Patients had advanced or metastatic NSCLC and had a record indicating receipt of systemic therapy from January 2017 through October 2020. The researchers evaluated differences according to race regarding biomarker testing and enrollment in trials.

“In conclusion, our study has identified that in real-world practice, Black/African-American patients were significantly less likely to undergo biomarker and NGS testing when compared [with] White counterparts, and [were] also less likely to be treated in clinical trials,” Dr Bruno summarized in her presentation. She also pointed out that of the factors that can affect health care disparities, improvements in access to biomarker testing may be achievable. 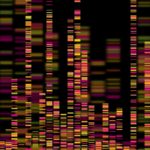