Patients receiving olaparib (Lynparza) for relapsed ovarian cancer (OC) may develop folate deficiency, according to findings of a small case series from researchers at Rush University Medical Center in Chicago.

The researchers discovered severe folate deficiency in a patient receiving olaparib, a poly (ADP-ribase) polymerase (PARP)-inhibitor, for relapsed ovarian cancer with no plausible explanation for the adverse effect. To their knowledge, this is the first case indicating an association between olaparib therapy and folate deficiency.

The chart review identified 7 patients who were receiving olaparib therapy for relapsed OC. Six of the 7 patients had moderate to severe folate deficiency while taking olaparib. Of those 6 patients, 5 had undetectable or near-undetectable folate levels (1.6 ng/mL or lower), and 3 developed transfusion-dependent anemia within a mean 39 days after olaparib initiation and required dose reduction or drug discontinuation.

Among the cases in this review, patients with relapsed OC treated with olaparib became folate deficient within weeks of initiating treatment. “We think that identifying and treating folate deficiency in this population is warranted, and may improve dose delivery and safety of olaparib therapy,” the researchers concluded. “Further studies should provide insight into potential interaction between PARP-inhibition, the folate pathway, and BRCA mutations in ovarian and other cancers. We are conducting translational research to elucidate the mechanism of this association.” 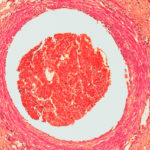 Association Between Multiple Myeloma With VTE and Increased Mortality at 2, 5 Years