People who have problems with numbers may be more likely to feel negative about bowel cancer screening, including fearing an abnormal result, while some think the test is disgusting or embarrassing, according to a Cancer Research UK supported study published Monday in the Journal of Health Psychology. 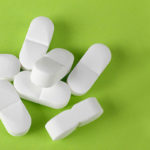