What is radiation therapy?

The radiation may be delivered by a machine outside the body (external-beam radiation therapy), or it may come from radioactive material placed in the body near cancer cells (internal radiation therapy, also called brachytherapy).

Systemic radiation therapy uses radioactive substances, such as radioactive iodine, that travel in the blood to kill cancer cells.

About half of all cancer patients receive some type of radiation therapy sometime during the course of their treatment.

Radiation therapy kills cancer cells by damaging their DNA (the molecules inside cells that carry genetic information and pass it from one generation to the next) (1). Radiation therapy can either damage DNA directly or create charged particles (free radicals) within the cells that can in turn damage the DNA.

Cancer cells whose DNA is damaged beyond repair stop dividing or die. When the damaged cells die, they are broken down and eliminated by the body’s natural processes.

Doctors take potential damage to normal cells into account when planning a course of radiation therapy (see Question 5). The amount of radiation that normal tissue can safely receive is known for all parts of the body. Doctors use this information to help them decide where to aim radiation during treatment.

Why do patients receive radiation therapy?

Radiation therapy is sometimes given with curative intent (that is, with the hope that the treatment will cure a cancer, either by eliminating a tumor, preventing cancer recurrence, or both) (1). In such cases, radiation therapy may be used alone or in combination with surgery, chemotherapy, or both.

Radiation therapy may also be given with palliative intent. Palliative treatments are not intended to cure. Instead, they relieve symptoms and reduce the suffering caused by cancer.

Some examples of palliative radiation therapy are:

How is radiation therapy planned for an individual patient?

A radiation oncologist develops a patient’s treatment plan through a process called treatment planning, which begins with simulation.

During simulation, detailed imaging scans show the location of a patient’s tumor and the normal areas around it. These scans are usually computed tomography (CT) scans, but they can also include magnetic resonance imaging (MRI), positron emission tomography (PET), and ultrasound scans. 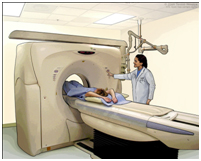 Computed Tomography Scanner. CT scans are often used in treatment planning for radiation therapy. During CT scanning, pictures of the inside of the body are created by a computer linked to an x-ray machine.

CT scans are often used in treatment planning for radiation therapy. During CT scanning, pictures of the inside of the body are created by a computer linked to an x-ray machine.

During simulation and daily treatments, it is necessary to ensure that the patient will be in exactly the same position every day relative to the machine delivering the treatment or doing the imaging. Body molds, head masks, or other devices may be constructed for an individual patient to make it easier for a patient to stay still. Temporary skin marks and even tattoos are used to help with precise patient positioning.

Patients getting radiation to the head may need a mask. The mask helps keep the head from moving so that the patient is in the exact same position for each treatment.

After simulation, the radiation oncologist then determines the exact area that will be treated, the total radiation dose that will be delivered to the tumor, how much dose will be allowed for the normal tissues around the tumor, and the safest angles (paths) for radiation delivery.

Radiation Therapy Head Mask. Patients getting radiation to the head may need a mask. The mask helps keep the head from moving so that the patient is in the exact same position for each treatment.

The staff working with the radiation oncologist (including physicists and dosimetrists) use sophisticated computers to design the details of the exact radiation plan that will be used. After approving the plan, the radiation oncologist authorizes the start of treatment. On the first day of treatment, and usually at least weekly after that, many checks are made to ensure that the treatments are being delivered exactly the way they were planned.

Radiation doses for cancer treatment are measured in a unit called a gray (Gy), which is a measure of the amount of radiation energy absorbed by 1 kilogram of human tissue. Different doses of radiation are needed to kill different types of cancer cells.