Are palliative care interventions effective in people coping with advanced cancer? A group of palliative care specialists in the United Kingdom sought to find out. They knew that the anxiety and depression that oncologists often associate with advanced disease can result from the serious issues these patients are dealing with, such as living with relentless pain, anticipating their approaching mortality, and leaving behind the people they love. According to the World Health Organization, the goal of palliative care should be to enhance quality of life while easing the pain cancer patients experience.1 Unfortunately, this cannot always be accomplished with medication and other conventional interventions. In fact, in a 2014 UK survey, palliative care specialists reported that they had difficulty managing their patients’ anxiety. 2 For these reasons, the British group decided to “explore other avenues that may improve well-being and symptoms in a palliative care population.” 1

Study participants were aged 18 years or older; at least half of them were in hospice, another palliative care situation, or undergoing treatment for advanced disease with palliative intent. Participants had also participated in discussions about how effective they found modalities such as aromatherapy, massage, or reflexology. 1 The UK group searched databases in The Cochrane Controlled Register of Trials using variations of the terms palliative, aromatherapy, reflexology, and massage. 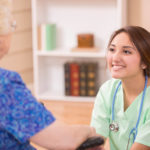 Effective Nursing Communication: Card Game is a Tool for Learning to Respond With Empathy