An initial physical examination revealed non painful, palpable, maculopapular lesions on the bilateral upper and lower extremities, more prominently in the lower limbs (Figures 1,2). The patient denied any systemic symptoms, specifically fever; a review of the system was positive for dysuria. Initial blood work, including a complete blood count and liver function test, was within normal limits. Based on the physical examination, vasculitis was suspected and a punch skin biopsy was obtained. Histopathologic examination revealed skin with a vasculocentric inflammatory infiltrate comprised of neutrophils, lymphocytes and histiocytes with associated dermal hemorrhage (purpura) and fibrinoid necrosis of the vessel wall and leukocytoclasis, confirming the diagnosis of leukocytoclastic vasculitis (Figure 3A,B). Given the patients dysuria, a urinalysis (UA) was obtained to rule out systemic/renal involvement. The UA was positive for leukocyte esterase, white cells 12 WBC per high power field (HPF) (normal, 0-2), and 4 RBC per HPF (normal, 0-2). There was no evidence of proteinuria or RBC casts. Urine culture was positive for gram negative rods. Other markers of systemic vasculitis, including ANA, ANCA, rheumatoid factor, and ESR, were all within normal limits. 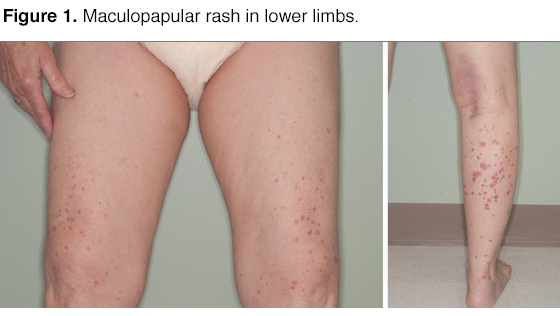 The possible etiologies for leukocytoclastic vasculitis, in general, are numerous. The critical distinction is between primary autoimmune (idiopathic) and secondary etiology. Potential entities to consider in the current case were autoimmune (given the patient’s history of rheumatoid arthritis), infection/bacteremia related to the dysuria and possible urinary tract infection, thrombocytopenia due to the possibility of thrombocytopenia induced by chemotherapy, paraneoplastic vasculitis (secondary to her underlying malignancy), or drug-induced vasculitis. The latter was favored due to the temporal relationship between the initiation of the capecitabine and the onset of the rash.

A urinary tract infection was initially treated with ciprofloxacin, 500 mg twice daily for 10 days. Three days after the ciprofloxacin was started the patient reported ongoing abdominal cramps with the ciprofloxacin and was switched to nitrofurantoin 100 mg twice daily twice daily for 10 days. Capecitabine was withheld immediately due to the clinical suspicion of being the culprit drug, and daily radiation treatment was continued with no interruption throughout the 5 and a half week planned course. The maculopapular rash improved with the application of triamcinolone topical cream once daily for the pruritus on the affected areas, still withholding the capecitabine. Due to the limitation of other chemotherapeutic options in lieu of 5-fluorouracil (5-FU) or capecitabine-capecitabine is a prodrug that is enzymatically converted to 5-FU (2)—with this curative treatment protocol and the cutaneous-only involvement of the vasculitis, the decision was to re-challenge the patient with capecitabine with close monitoring of any systemic involvement. The capecitabine was re-introduced 10 days after the date it was initially withheld. Two days later, the patient again developed an identical maculopapular rash with similar distribution. A UA at this time was negative, excluding the possibility of renal/systemic involvement. The patient was started on prednisone 20 mg daily throughout the remaining 3 weeks of the chemoradiation treatment with the continuation of the capecitabine. Approximately 3 days from the initiation of the prednisone, the skin lesions were improving: the rash on the legs was no longer palpable and the rash on the arms was fading. Prednisone (20 mg) was continued until the last dose of capecitabine, which coincided with the last day of RT treatment. After completing chemoradiation treatment, the prednisone was tapered as follows: 15 mg daily for 5 days, followed by 10 mg daily for 5 days, 5 mg daily for 5 days, 2.5 mg daily for 5 days, and was then stopped.

Six weeks after the completion of the chemoradiation treatment the patient underwent a robotic abdominoperineal resection with a bloc posterior vaginectomy of the rectal tumor. Pathology reported residual, invasive, moderately-differentiated adenocarcinoma with 5-10% viable tumor and a tumor regression grade of 2 [0-3], which indicates an excellent response to the neoadjuvant chemoradiation treatment. The final pathological staging was primary tumor:ypT3, regional lymph nodes:ypN0, and distant metastases:pMX. The patient will require four months of adjuvant chemotherapy as per the current guidelines, given the high risk of recurrence with the T3 disease. The patient received 5-FU based chemotherapy in the form of 2,400 mg/m2 5-FU continuous infusion over 46 hours beginning day 1 as part of FOLFOX regimen (oxaliplatin, fluorouracil, and leucovorin) repeated every 2 weeks, as part of the standard protocol the patient received dexamethasone 20 mg intravenous in 50 mL normal saline over 15 minutes for prevention of oxaliplatin hypersensitivity, the patient completed the first cycle of the chemotherapy without any reported vasculitic rash.