According to a systemic review by Kirby, Hirst, and Crawford, castration-resistant prostate cancer (CRPC) is a common and highly morbid progressive form of prostate cancer, with around 10%–20% of prostatic cancer patients progress­ing to this state within five years. Metastases are present in more than 84% of CRPC cases, and the reported survival is 9–13 months in patients with metastatic CRPC (mCRPC).1 More recently, significant advances in second-generation hor­monal therapy,2,3 immunotherapy,4 bone-targeted therapy,5,6 and chemotherapy7 have become available for the treatment of mCRPC. Despite improvements in patient survival, mCRPC remains incurable, and improvement in the quality of life (QOL) is still a challenge. Therefore, a novel, personalized therapy with a new therapeutic cancer vaccine founded on gene-based medicine is much awaited.

Regarding gene therapy, so far 1,331 cancer gene therapy protocols have been conducted around the world (http://www.wiley.com/legacy/wileychi/genmed/clinical/, updated June 2014). Interestingly, the second highest number of protocols has been for prostate cancer, as the prostate is regarded as an ideal target organ for the development of cancer gene thera­py.8 Since 1996, our study group has been taking on chal­lenges to develop cancer gene therapy and the group has conducted several clinical trials on prostate cancer.9–11 These two-way, bench-to-bedside and bedside-to-bench, transla­tional researches clearly indicate that the induction of robust systemic effects through the activation of antitumor immunity is the key to creating an ideal therapeutic strategy for in situ cancer gene therapy. Recently, new therapeutic genes such as MDA-7/IL-24,12 GLIPR1/RTVP-1,13 and REIC/Dkk-3,14 are being investigated, which are multifunctional with selec­tive killing and immunomodulation. In addition, new, sophis­ticated approaches in the form of armed oncolytic viruses15,16 have also been developed. OncoVexGM-CSF (now, talimogene laherparepvec, or T-VEC) is an oncolytic herpes simplex type 1 virus carrying GM-CSF and the first oncolytic virus found effective in a Phase III clinical trial for unresected stage IIIB/C and IV melanoma.17 An oncolytic virus can replicate only in cancer cells, causing cancer cell death. The virus expressing GM-CSF spreads and initiates an immune response in distant tumors. The new strategy, based on the concept of simultaneous induction of selective killing of cancer cells and augmentation of antitumor immunity, leads to a new generation of cancer vaccines and is expected to become a leading standard in the treatment of most solid cancers, with gene therapy.

The reduced expression in immortalized cells (REIC)/Dickkoph-3 (Dkk-3) gene was isolated and cloned as an immortalization-related gene at Okayama University in 2000,14 and identified as a new tumor suppressor gene.18 This gene is identical to the human Dkk-3, one of the Dkk fam­ily genes (hDKK-1, 2, 3, and 4) and has rapidly emerged as a key player in most human cancers.19 The expression of REIC/Dkk-3 is significantly reduced in a wide variety of cancer cells including prostate cancer, and its forced expression using adenovirus vector carrying the human REIC/Dkk‑3 gene (Ad-REIC) induces cancer-selective apoptosis as a result of unfolded protein response due to endoplasmic reticulum stress (ER stress).20 Interestingly, ER stress mediates the enhanced IL-7 expression in co-infected normal fibroblasts, resulting in the activation of innate immunity involving natural killer (NK) cells.21 In addition, the secreted REIC protein with immunomodulatory function creates an optimal environment for the activation of host immune cells, inducing cytotoxic T lymphocytes.22,23

In order to develop Ad-REIC as a new form of thera­peutic cancer vaccine, the first in-human clinical study, a Phase I/IIa study of in situ Ad-REIC gene therapy for pros­tate cancer, was initiated at Okayama University from Janu­ary 2011. The original Ad-REIC, a replication-deficient adenovirus vector, was constructed at Okayama University,18 and its current Good Manufacturing Practice (cGPP) prod­uct was supplied by Momotaro-Gene Inc. Two groups of patients were treated: group A consisting of patients with castration-resistant PCa with or without metastasis, and group B consisting of patients with high-risk, localized PCa scheduled to undergo radical prostatectomy. Ad-REIC was injected directly into the prostate or metastatic tumor using four escalating doses of viral particles (vp), starting from 1.0 × 1010 to 3.0 × 1012 vp. In group A, patients received two injections at four-week intervals. In group B, patients received two injections at two-week intervals and underwent a radical prostatectomy six weeks after the second injection. In group A, additional injections were permissible in cases show­ing positive responses. As of November 2014, 18 scheduled cases in group B were completed, demonstrating the remark­able safety profiles of Ad-REIC and dose-dependent clinical effects without reaching the maximum tolerated dose. Since the maximum feasible dose for intratumoral injection of Ad-REIC was determined, new enrollment in group A was also closed. The entire clinical data on the Phase I/IIa study of in situ Ad-REIC gene therapy for prostate cancer will be published elsewhere. The patient whose case is presented fol­lowing has given his consent for this publication.

A 63-year-old man with mCRPC, who showed progres­sion on decetaxel treatment, was referred to our hospital for Ad-REIC gene therapy in November 2012. In 2009, he vis­ited the urology department of a regional general hospital with nocturia, and his prostate-specific antigen (PSA) level was measured for the first time. The PSA level was 483 ng/mL, and prostate biopsy showed an adenocarcinoma having a Gleason score of 9 (4 + 5). After being diagnosed with a locally advanced prostate cancer (stage C), he received combined androgen blockade (CAB) with the nonsteroidal antiandrogen bicalutamide and the LH-RH analog goserelin acetate, show­ing immediate normalization of the PSA level (0.01 ng/mL). In 2010, after 15 months on CAB, he received TomoTherapy, a form of intensity-modulated radiation therapy, with 74.8 Gy in 34 fractions in combination with CAB, at a regional cancer center. In May 2012, estramustine phosphate was prescribed after evaluating the anti-androgen withdrawal response to bicalutamide, with gradual elevation of the PSA level. Estra­mustine was unable to lower PSA elevation, and consequent CT, MRI, and PET/CT revealed left obturator LN metasta­sis. From August 2012, he received five cycles of chemotherapy with decetaxel 75 mg/m2 every 3–4 weeks at another regional core hospital (Fig. 1). PSA response to the last two cycles of docetaxel was not achieved because of bulky pelvic LN metas­tases. The patient suffered severe peripheral neuropathy, in the form of tingling sensations in the hands. 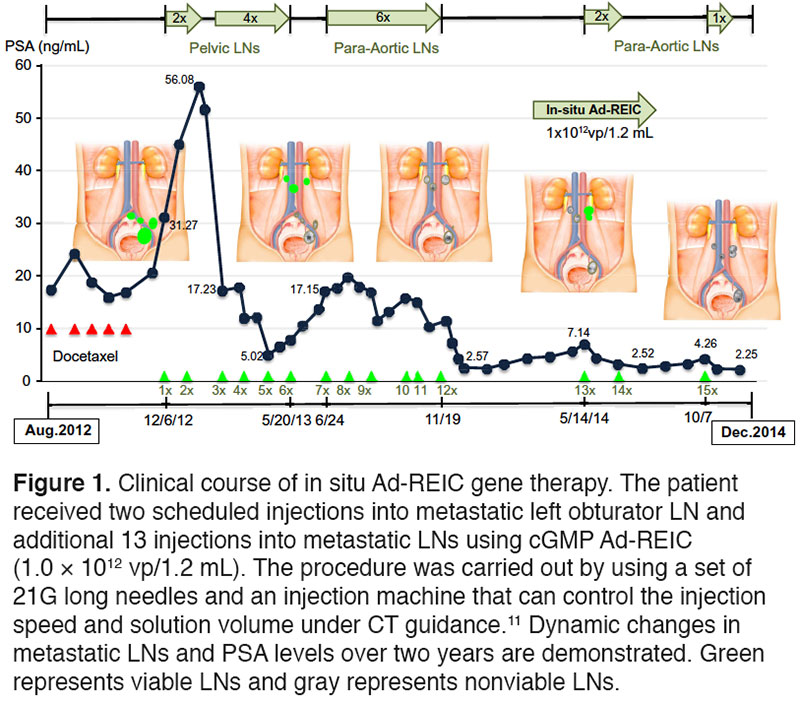 At our hospital, we carefully evaluated the indication for Ad-REIC gene therapy and informed the patient that the gene therapy protocol was approved by the Institutional Review Board (IRB) at Okayama University Hospital and the Japanese Government, although still in the investiga­tional stage. His laboratory data was almost normal except for mild anemia (RBC 3.42 × 106/μL, Hb 40.3 g/dL). He was also taking an oral antidiabetic drug (Metformin), and his HbA1c (6.2%) was under good control. He reviewed the informed consent document and received individual counsel­ing, including a thorough discussion about alternative treat­ments or the right to decline participation. Subsequently, he underwent a CT-guided needle biopsy of the left obtura­tor LN, which showed a metastatic adenocarcinoma with a Gleason score of 9 (5 + 4) (Fig. 2A), while ultrasound-guided transrectal 10-core prostate biopsy showed no cancer cells. In December 2012, we planned to enroll the patient as the eighth case in group A receiving a dose level 3 of 1 × 1012 vp, and direct injection of Ad-REIC into the left obturator LN under CT guidance was approved by the eligibility monitor­ing committee of the IRB. 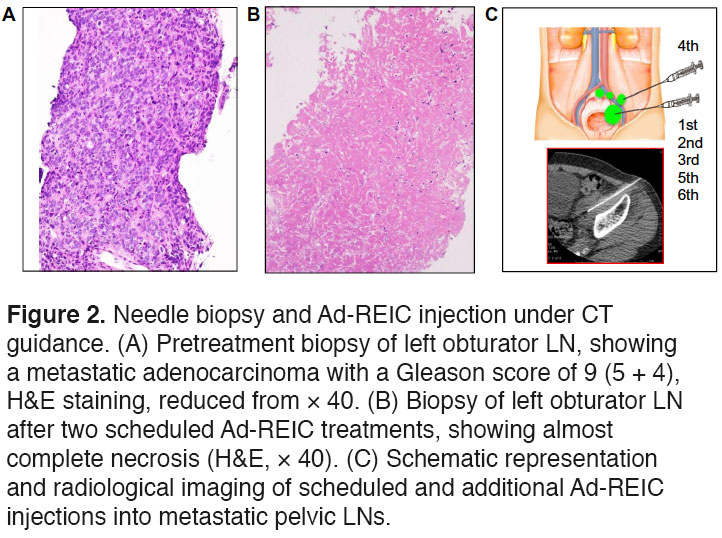 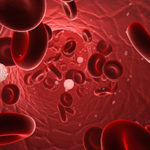