Reported memory loss and awareness of side effects. One aim of the study was to understand whether women experienced impaired memory postchemotherapy treatment. Fewer PR participants (58.7%) reported short-term mem­ory loss postchemotherapy compared to US women (90.9%) (Table 5). Half as many PR survivors (21.7%) as US partici­pants (48.6%) reported having difficulty finding their way around (Table 5, P , 0.002). These results suggest that US participants perceived impaired short-term memory at a higher rate than PR participants, OR = 7.04. We found an association between groups in reported postchemotherapy way-finding (Table 5, P , 0.01). This suggests that US sur­vivors perceived difficulty in finding their way around at a higher rate than PR survivors, equal to OR = 3.35.

Overall, when combined and stratified based on time since diagnosis, the data indicate that 77.8% participates less than 1 year postchemotherapy reported short-term memory loss (Table 6). The percentage of reported short-term mem­ory loss declined based on the time since treatment after three years (64.6%). When asked about way-finding, the results were opposite with only 22.2% of those with less than one year postchemotherapy reporting more difficulty and those with greater than one year reporting 33%–36% of the time (Table 6). This is consistent with numerous reports of long-term spatial learning and memory impairments reported postchemotherapy.13 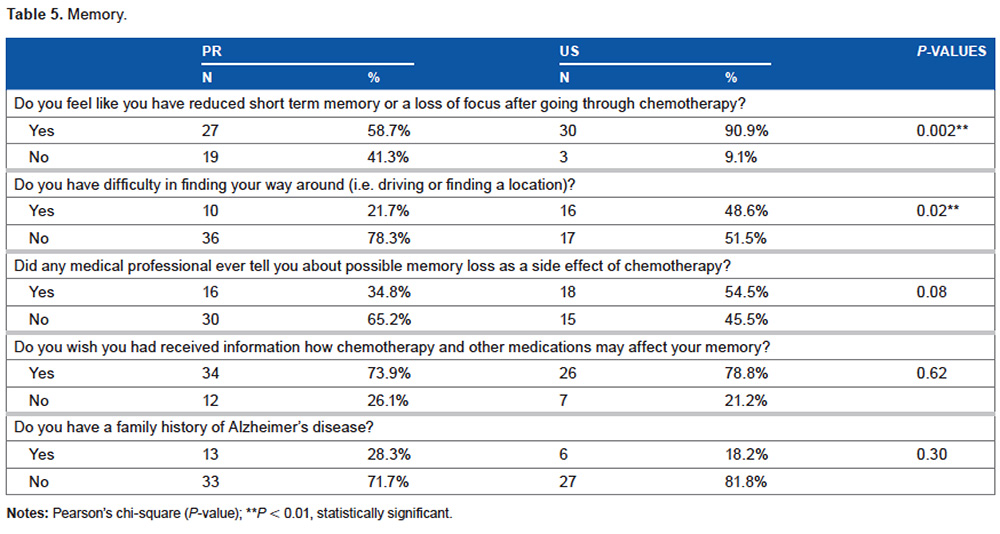 (To view a larger version of Table 6, click here.)

Fewer PR women (34.8%) compared to US women (54.5%) reported that a medical professional discussed the cognitive side effects of chemotherapy with them (Table 5). The majority (PR 73.9% and US 78.8%) of participants wished that they had received information about how chemotherapy and other medications can affect memory (Table 5), which did not significantly correlate with whether an individual reported an impairment (data not shown).

Reported alcohol use before, during, and postchemo­therapy. Another aim of the study was to understand differences between populations in alcohol consumption and postchemo­therapy changes in alcohol consumption. In our sample, there were differences in prechemotherapy consumption with more than half of PR participants, but less than a quarter of US females reported that they did not drink alcohol prior to chemo­therapy (Table 7). Pearson’s chi-square was performed to assess the relation between alcohol intake frequency and quantity before chemotherapy among PR and US participants (Table 7). There was a significant association between ethnicity (PR/US) and whether women consumed alcohol before their diagnosis of female cancer (Table 7, P , 0.001). US women consumed alcohol before the diagnosis of cancer at a higher rate than PR women, equal to OR = 7.63. Also, there was a significant asso­ciation between groups and frequency of alcohol consumption (Table 7, P , 0.001) and quantity (Table 7, P , 0.001). 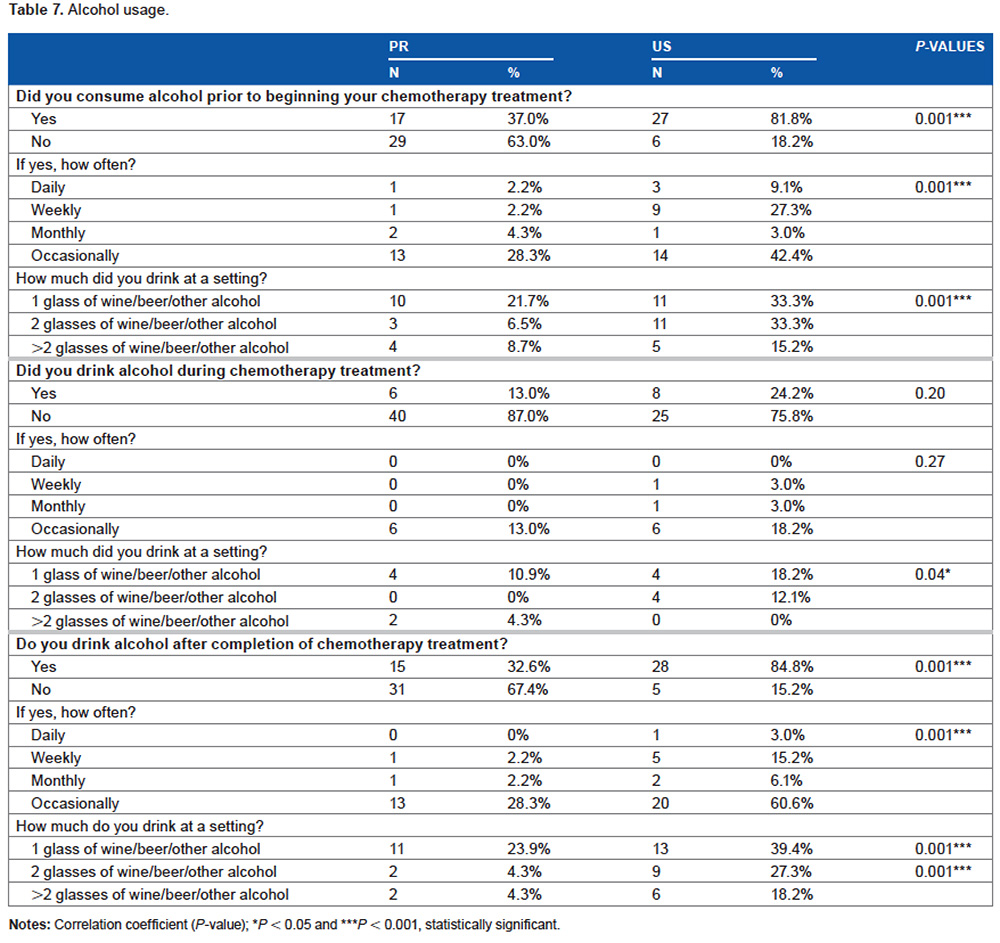 The majority in each group did not drink alcohol dur­ing chemotherapy (PR 87.0% and US 75.8%), and those participants who did consume alcohol during chemotherapy reported drinking once a week or less (). No differ­ences were seen when Pearson’s chi-square was used to assess the relation between alcohol intake frequency during chemo­therapy among PR and US participants (Table 7).