The nutritional status and body composition of patients with advanced cancer entering clinical trials may need greater attention. A new study has found that a significant number of patients involved in clinical trials for drugs being developed to treat cancer may be malnourished and sedentary, possibly leading to inaccurate trial results. Researchers found that those patients who were malnourished had higher rates of adverse effects from therapy, higher rates of hospitalizations, lower response rates, and a shortened survival.

Lead study author Rishi Jain, MD, assistant professor in the Department of Hematology/Oncology at Fox Chase Cancer Center, Philadelphia, Pennsylvania, said although worse outcomes are expected among patients with malnutrition, the magnitude of this effect was alarming. “There was [an approximately] twofold increased risk of hospitalizations and severe side effects in those who were malnourished. Also, patients who were malnourished were only able to stay on the clinical trial study for half as long,” explained Dr Jain.

Previous research has shown that malnutrition and physical inactivity are common among patients with advanced cancer and are also associated with poor outcomes. Dr Jain and colleagues examined the relationships between baseline nutrition and exercise status with trial endpoints that included toxicity and survival. The researchers recruited 100 patients between July 2016 and May 2017 and conducted baseline assessments of nutrition and exercise status prior to initiation of phase 1 and 2 oncology clinical trials.

Among the 100 patients (54% female, 46% male), 60 were beginning trials studying immunotherapeutic agents and 87 were entering phase 1 trials. The median age was 60 (range: 28-85 years) and the median follow-up was 306 days. In this cohort, 55% had 0 to 2 prior lines of therapy and 71% had an Eastern Cooperative Oncology Group (ECOG) performance status of 1. Using Fisher’s exact test and chi-square analysis, the researchers examined whether demographics and baseline clinical measures were associated with critical malnutrition. They used Kaplan-Meier curves with log-rank tests to compare duration on study and overall survival (OS). 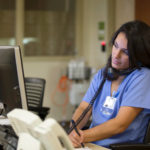