Site of metastasis is key to the length of time a patient can survive metastatic castration-resistant prostate cancer (mCRPC), according to new research. In the largest study on the topic to date, scientists have found that survival is contingent on the organs where the metastases are located.1

The results of the recently published meta-analysis came from a team led by Susan Halabi, PhD, professor of biostatistics at Duke Cancer Institute in Durham, NC.  Her colleagues on the project came from cancer research centers in the United States, China, France, Australia, Canada, and the United Kingdom.

Four Sites Studied
The meta-analysis substantiates earlier studies with small patient samples. The premise for undertaking this project was that the median overall survival time of men with mCRPC who had lung metastases would be shorter than for those who had metastases to the bone.

The investigators searched PubMed and ClinicalTrials.gov for phase 3 clinical trials of docetaxel in patients with chemotherapy-naïve mCRPC. Docetaxel was the only chemotherapy agent included; it was the standard of care in most of the available trials, including those of patients with visceral metastases.

The researchers analyzed data from 9 phase 3 clinical trials that comprised 8820 men. The study dates were from 1999 to 2015. The subjects’ median age was 68 years; the majority of subjects were white; 94% of the patients had performance status of 0 to 1. Median prostate-specific antigen (PSA) was 97 ng/ml, hemoglobin was 12.9 g/dL, and alkaline phosphatase was 138 U/L. The median follow-up time among surviving patients was 21.8 months (range: 0-91.2) with a total of 5470 deaths.

The largest group of patients was in the bone metastases category (72.8%). The second-largest group had visceral disease (20.8%) with lung and/or liver metastases. Lymph node-only disease was present in 6.4% of patients, and 3.0% had non-lung, non-liver visceral disease. After the exclusion of some other ineligible subjects 8736 patients were included in the final meta-analysis. 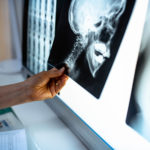