Receiving a diagnosis of cancer is terrible. Having cancer and being prevented from getting it treated is cruel. Living with the person who is preventing you from receiving treatment is heartbreaking. Having that person also abuse you in other ways is unspeakable.

That is one scenario of intimate partner violence (IPV) among people who have received a diagnosis of cancer. Although the patient may feel powerless to stop her abuse, the oncology nurse is in a strong position to come to her aid. In a recently published review, Wendy A. Johnson, MSN, RN, PhD(c), and Huibrie C. Pieters, PhD, DPhil, RN, discuss the existence of IPV among survivors and offer ways oncology nurses might be able to help these victims.1

THE NUMBERS ARE FRIGHTENING

Although IPV can affect men as well as women, it is the most prevalent type of violence against women globally.1 Approximately one-third of women worldwide who have been in a relationship have experienced physical or sexual abuse by their partners.1 One of every three females in the United States has been subjected to physical abuse, and almost one of every 10 women has been raped by her domestic partner.1 Male intimate partners are responsible for the deaths of two of every five females killed in the United States.1 The financial burden of intimate partner violence is more than $5.8 billion annually in this country, and that number is increasing.1

The Centers for Disease Control and Prevention (CDC) defines intimate partner violence as violence occurring between two people who are married or dating, or who were in such a relationship in the past.2 The behavior ranges from one incidence of violence to multiple ongoing episodes, defined as battering.2 CDC describes IPV as four types of behavior.

Physical violence A person hurts or tries to hurt their partner by hitting, kicking, or using a type of physical force.

Sexual violence Forcing a partner to take part in a sex act when the partner does not consent.

Stalking A pattern of repeated, unwanted attention and contact that causes fear or concern for a person’s own safety or the safety of someone close to the person.

Psychological aggression The use of verbal and nonverbal communication with the intent to harm another person mentally or emotionally and/or exert control over another person.

Nurses should note that several types of IPV may occur together.2

WHO IS AT RISK?

Individual factors such as younger age, history of substance abuse, history of physical or psychological abuse;

Relational factors such as stress related to marital or economic instability, raised in a dysfunctional family;

Community factors such as poverty, living in a community that does not sanction against IPV;

Gender norm factors such as living within a society that holds to traditional gender norms.1

Johnson and Pieters surmise that these risk factors are the same for women with cancer; however, the cancer patient has other risks factors as well. A woman in poor health may be more dependent on others for care, may live in isolation, and is unable to get out and about without help. Older women are at increased risk for cancer; they are also subject to domestic violence, as practitioners who treat older patients should bear in mind.

A woman who is compromised by cancer might have worse health as a result of IPV. Her presenting symptoms may be acute or chronic, and, with the exception of obvious acute injuries and unintentional pregnancy, the oncology nurse might have a difficult time differentiating the symptoms of cancer from those of domestic abuse. For example, the nurse should be aware that since breast cancer is the most prevalent type of cancer, there is evidence that a number of women must cope with IPV and breast cancer simultaneously.1 Similarly, studies have shown a higher incidence of cervical cancer among women who suffer from domestic abuse because they do not undergo frequent screening.3 A study of 101 women with breast, endometrial, or ovarian cancer found that a history of violence in these patients was common (48.5%), and the advanced stage of their illness at diagnosis correlated with extent of their history of IPV.4

The woman with cancer is vulnerable to a unique type of abuse, which may begin with emotional abuse. An abusive husband often may become more controlling following a cancer diagnosis in his wife, perhaps by taking more restrictive control over finances. Some husbands may control their wives’ cancer treatments by refusing to drive them to all their appointments, knowing that she is in no condition to drive herself. In one case, a man attempted to prove the physician wrong by treating his wife himself using his own herbal treatments. He absolutely refused to allow his wife to receive chemotherapy.1 A husband reportedly took his wife from the hospital before her treatment for cervical cancer was completed; her status is unknown. One woman told the investigators that her partner forced her to have sexual relations with him as soon as she was discharged from the hospital. Johnson’s and Pieters’ research revealed cases of husbands denying their wives medication, palliative care, even food and water.1

WHEN ABUSE IS SUSPECTED

The patient with cancer may not want to discuss her IPV situation or, if her partner does not leave her alone with the clinician, she may not be able to discuss it. The oncology nurse is often the team member who has the closest relationship with the patient, and the person who would be most likely to identify IPV and recognize the stress it causes. If the patient is not alone with the nurse, a little creative subterfuge could work. Two clinicians could work together during the visit; one clinician could distract the partner with conversation while the nurse discreetly asks the patient pointed questions. Or perhaps the patient and nurse could walk together to the restroom to collect a specimen.1

Nurses should be aware of cultural considerations, as some women may accept abusive behavior as normal in her culture. For this reason, the authors discourage the use of the words violence or abuse. These patients may not relate to such terms. The authors emphasize that when the nurse suspects IPV, the subject should be approached in a nonjudgmental, supportive, and concerning way. This approach is more likely to make the patient feel safe in disclosing the abuse.1 They suggest the nurse focus on how the woman feels about specific behaviors of her partner, as a way of approaching the abuse.

The nurse may need to have several conversations before the patient feels comfortable discussing her situation. The authors suggest starting with conversational questions such as “How are things going at home?” or “How supportive is your husband concerning your health?”1 When the patient feels more comfortable and acknowledges her situation, the nurse can move on to more specific screening questions and work with a multidisciplinary team to help the patient and keep her safe.

Oncology nurses are in an exceptional position to help cancer patients living in an environment of IPV. Although this group of women is still relatively unexplored, the authors call for establishing clinical guidelines to help oncology nurses assess and intervene in these cases.1 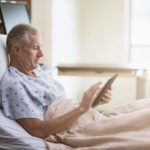