It was a computer thing. I needed to scan a document and attach it to an e-mail. Not rocket science, but it was a while since I last did it, and I was having trouble remembering how to do it. I was stuck in one of those circles where I clicked and searched and kept coming around to the same place. I knew there was an easy way to do it but I couldn’t recall how to get there. Turned out there was another way of getting it done, five steps instead of two. “Ah ha, got it.” I said out loud. My son overheard me and asked what I was talking about. I showed him how I made my way out of my predicament. He said, “Yeah, a work-around.” Turns out my lack of computer savvy also applied to computer lingo. He didn’t need to explain what he meant because I understood from the context. Still, I looked it up to check. Merriam Webster’s online dictionary defined work-around as: a plan or method to circumvent a problem (as in computer software) without eliminating it.1

What do computer work-arounds have to do with communication? Instead of looking at work-arounds from a task perspective, I look at it from a psychological perspective. Interpersonal relationships often involve work-arounds, like the very basic but familiar situation of a kid afraid to go to Dad for what he or she wants and instead figures out a way to present it to Mom to get her okay. A work-around.

Many years ago I worked with a nurse who had years of experience but less attention to details than she should have had. Quite simply, if not lazy she was certainly complacent and on top of that she had a definite idea that she did a good job. She had no problem letting others know what they had missed but conveniently ignored what she had forgotten. Because of her tenure on the job, our manager deferred any complaints and excused her work behavior with comments such as, “She is doing her best,” or “She’s been here a long time.” Because the manager was unwilling to address the issues, the rest of us coworkers adjusted our behavior in various ways. One nurse avoided her and was unwilling to help her out; another believed she might inspire the slacker by being overly helpful. Essentially we all worked around her, we made accommodations for her shortages. 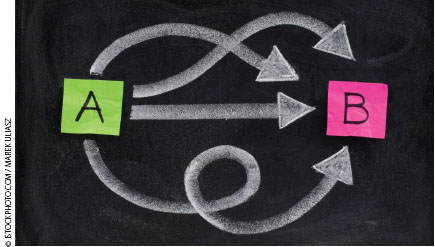 Today, I try to do things differently. I’m more inclined to approach the person directly. As I’ve matured I tend to be less likely to work around a problem; in fact, I value being direct and tend to think it is the better way of doing things. Often that is the method I use with patients too. I think the direct approach is better. But recently I re-evaluated that thinking. I had two patients where using a work-around was preferable.

Sam is a math professor. Usually I think of math teachers as the most direct; after all they know that the shortest distance between two points is a straight line. But for Sam, somehow this wasn’t the case. As he went through his chemo and radiation for head and neck cancer, he resisted all of our suggestions for managing his symptoms. He was sure that he knew what would work and what wouldn’t. He had agreed to have a PEG, but his goal was not to use it. He knew he might need pain medications, but his goal was not to take any. So as he waited, he set up a date for when he thought he might start the pain medications. The date was arbitrary. He picked a day and that became the date in his head, but his symptoms started to worsen before he reached “the date.” He started to use the PEG but resisted the pain meds, saying, “I can take it.” In fact, this was a matter of pride for him. He had locked the door against any conversation involving taking the pain medications before “the date.”

I needed a work-around, another way to accomplish the same goal. I changed my language from using the word pain to his description of throat soreness. I focused on issues that his discomfort was causing: weight loss, sleeplessness, irritability. Then I explained that by reducing the throat soreness (which I expected him to have as a result of his treatment) I might get a handle on his other issues. He agreed to start taking pain meds and though his treatment course was still difficult, it was better than it had been. The work-around was more work, but it ended up being effective.

The second case of a work-around was a patient with metastatic breast cancer and an underlying psychiatric disorder. There was conflicting information about her psychiatric history with her History and Physical reporting she was bipolar, while her significant other insisted she was paranoid schizophrenia. The through line for her was anxiety. Everything stimulated anxiety, and she had little in the way of personal resources for dealing with it. She had painful bone mets but was afraid to take pain meds. She had ongoing low levels of nausea but was convinced the antiemetics made things worse. Her reasoning was unreasonable, but it was all I had to work with. The direct route would have been to address her pain and nausea, but the indirect way, the work-around, was to address her anxiety. So I started there and that was where I made the most progress. With her anxiety reduced, she agreed to a trial of low-dose pain meds.

Labeling this type of interaction a work-around is just another way of defining what we often already do, tailoring our care to the patient. But I like the idea of calling it a work-around; I like the idea of looking at it from a slightly different angle. There is usually more than one way to solve a problem. Some solutions are more involved than others, some are hard to discern. But considering a work-around as a solution is a creative way of approaching some of those more challenging communication cases. ONA