PDF of CE 0810
HOW TO TAKE THE POST-TEST: To obtain CE credit, please click here after reading the article to take the post-test on myCME.com.

Lung cancer is the leading cause of cancer deaths in the United States, resulting in more deaths per year than breast, colon, prostate, and pancreatic cancers combined.1 In the past 5 to 10 years, significant advances in treatment have emerged, which have improved overall survival as well as response rates for metastatic non-small cell lung cancer (NSCLC). Targeted therapies have been a large part of the advances—in particular, one class of drugs called epidermal growth factor receptor (EGFR) inhibitors. These drugs target receptors either on the outside of cancer cells or at an intracellular domain to inhibit cell survival, metastases, angiogenesis, and inhibition of apoptosis.

Erlotinib (Tarceva) is an EGFR-tyrosine kinase inhibitor (TKI), meaning that it inhibits EGFR by gaining entrance into the cell and blocking the downstream signaling at the tyrosine kinase domain. Erlotinib is a small molecule. Drugs of this type have a different structure and work at different places in the cell than large molecule drugs; they are typically able to diffuse into cells and can act on targets that are found inside the cell. Erlotinib is orally available, which can aid or cause challenges in adherence. It is given once daily at a recommended dose of 150 mg. Based on the results of a large, randomized, phase III clinical trial showing improved response rates and overall survival in patients taking erlotinib versus placebo, erlotinib was FDA approved for second- or third-line treatment of locally advanced or metastatic NSCLC after failure of a prior chemotherapy regimen.2 The most common side effects experienced by patients in the study were rash and diarrhea. Grade 3/4 rash occurred in 9% of patients, and grade 3/4 diarrhea developed in 6% of patients.2

Cetuximab (Erbitux) is another EGFR inhibitor. It is not yet FDA approved for NSCLC, but it does have a Medicare compendia approval and clinical trial data to support its use in metastatic NSCLC. Cetuximab is a monoclonal antibody that attaches to the EGFR receptor on the cell surface (large molecule), thus preventing binding of the EGF ligand to the receptor. It is available as an intravenous drug. It gained Medicare approval for use as a result of a large, randomized, phase III clinical trial commonly known as the FLEX trial.3 This predominantly European trial randomized chemotherapy-naive patients with stage IIIB/IV lung cancer to receive first-line cisplatin and vinorelbine (CV) or CV plus cetuximab. Patients in the cetuximab arm showed a 2-month improvement in overall survival. The major side effects of cetuximab, as for other EGFR inhibitors, were rash and diarrhea, with grade 3/4 rash affecting 10% of patients and grade 3/4 diarrhea affecting 5% of patients.3 Cetuximab is currently awaiting FDA approval for stage IIIB/IV NSCLC. Gefitinib (Iressa) was the first EGFR inhibitor to become available in the United States. The FDA approved it based on phase II data showing promising response rates; however, in 2005, the labeling was revised as a result of failure of the phase III trial data to show a benefit over placebo.4 Gefitinib is an oral tablet dosed at 250 mg daily and is a small molecule TKI. Under current labeling, it is available only to patients who were taking the drug before its use was restricted who have proven continued radiographic response to the drug.

The most commonly seen toxicity from EGFR inhibitors is a papulopustular rash that erupts most often on the face but can also be seen on the chest, back, trunk, and limbs (Figure 1). It tends to be associated with dry skin and at times can be diffuse and very disruptive to activities of daily living. The rash commonly manifests in the first 1 to 2 weeks of treatment. Table 1 provides information on incidence and severity. Other skin and hair side effects of EGFR inhibitors are mild to moderate alopecia, paronychias, conjunctivitis, hypertrichosis, skin fissures, and generalized pruritus.

Diarrhea is another common class effect of these drugs. It can be seen at any time during treatment with EGFR inhibitors. Severe diarrhea occurred in about 3% to 6% of the patients taking erlotinib, cetuximab, or gefitinib in phase III trials. Other less common GI side effects can be nausea and vomiting, anorexia, and stomatitis.

Infusion reactions have been seen with cetuximab, which is a monoclonal antibody with some murine properties. The rate of grade 3/4 infusion reactions with cetuximab was about 4% in the lung cancer trial.3 Some electrolyte imbalances, such as hypomagnesemia and hypokalemia, have been more common in patients taking cetuximab and are often exacerbated by diarrhea. The rates of grade 3/4 hematologic side effects were generally similar in patients receiving chemotherapy alone and those also receiving cetuximab,3 and hematologic side effects are generally not significant with EGFR inhibitors. Febrile neutropenia was more significant in the cetuximab-containing arm of the FLEX trial (cetuximab, 22%; chemotherapy only, 15%; P =.0086), although the grade 3/4 neutropenia rates were exactly the same.3

In the EGFR-TKIs, rare but statistically significant occurrences of interstitial lung disease (ILD) have been reported. This disease manifests as acute-onset dyspnea, usually occurring over a 24- to 48-hour period. ILD is an acute inflammation of lung tissue as a reaction to the drug and is a reason for permanent discontinuation of therapy. CT of the chest is often diagnostic and shows an inflammatory process within the lungs. In studies of gefitinib, ILD occurred in 0.3% to 1% of the US population and in about 2% of Japanese patients.5 ILD rates in the BR.21 erlotinib trial were less than 1%.2 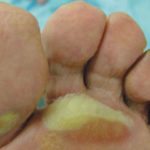 Prevention and management of hand-foot syndromes