Leukemia is a malignancy that develops in the bone marrow and affects hematopoiesis. It accounts for almost 10% of all malignancies diagnosed each year in the United States, with 40,000 to 50,000 new diagnoses annually.1,2 Nearly half of patients with leukemia will die from the malady.1,2 This review focuses on the four major classifications of leukemia with particular emphasis on acute versus chronic and myeloid-derived versus lymphoid-derived blood elements.

Acute myelogenous leukemia (AML) The incidence of AML in the United States is approximately three cases per 100,000 persons.1,3 The risk of developing AML increases with age, the same as with most nonhematologic malignancies. Frequently, patients will have no preexisting hematologic condition; however, patients who had myelodysplasia (formerly referred to as preleukemia and common in the elderly) have an increased risk of developing AML.1-3 Exposure to previous chemotherapy (particularly alkylating agents), industrial chemicals, and radioactive material also increases this risk. Most cases of AML develop in adults, but children, particularly those born with genetic abnormalities such as Down syndrome, Bloom syndrome, or Fanconi anemia, are also susceptible to this disease.3

The signs and symptoms of AML manifest as a result of the disease’s effect on normal blood cell production. While the bone marrow is overwhelmed with leukemic cell production, a corresponding decrease in normal platelets, red blood cells (RBCs), and leukocyte production increases the risk of bleeding, causing fatigue from anemia and infection due to neutropenia. Occasionally, bone pain can manifest due to cell turnover in the bone marrow. In addition to easy bruising caused by thrombocytopenia and pallor caused by anemia, some patients present with hepatosplenomegaly and lymphadenopathy, but this is rare in AML. Occasionally, patients can have central nervous system (CNS) involvement; however, this also is a rare situation and happens more often in patients with acute lymphoblastic leukemia (ALL).4,5

When AML is suspected, routine laboratory studies such as CBC are obtained, followed by a bone marrow biopsy. Lumbar puncture is performed to evaluate the spinal fluid for leukemic cells if CNS involvement is suspected. 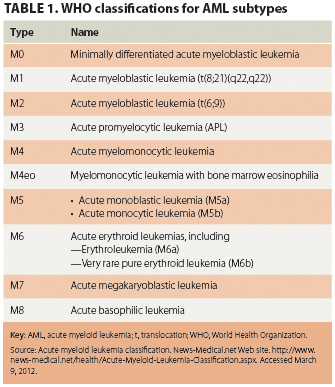 AML is classified into several subtypes, identified as M0 through M82-3 (Table 1). AML classifications are based on levels of myeloid maturation, with M0 reflecting difficulty in delineating whether the disease is truly a myeloid-type versus lymphoid-type malignancy, as it lacks both myeloid and lymphoid markers. Some unique types such as M6, M7, and M8 are classified according to the erythroid, megakaryocyte, and basophilic series, respectively, involved in the malignancy. These subtypes are extremely rare.1-3

The most efficient, and currently most often used, method for identifying the type of acute myelogenous leukemia is flow cytometry. Cytogenetic tests can help identify the type of leukemia as well as determine prognosis in many cases, but it can take up to 2 weeks for test results to be obtained and may not be clinically practical patient management.3 Fluorescence in-situ hybridization (FISH) can accelerate the evaluation process for nonrandom cytogenetic abnormalities, which represent mutations that are consistent enough to be identified with a particular malignancy.2,3

Acute myelomonocytic leukemia (M4 type, with both myeloid and monocytoid cell lineages and inversion of chromosome 16) is associated with a good prognosis. AML M2, associated with t(8;21) (translocation in chromosomes 8 and 21), also carries a good prognosis. Deletions in chromosomes 5 or 7 often occur in patients who had a preexisting myelodysplastic syndrome. In cases where there are no chromosomal abnormalities or chromosome 8 abnormalities, the prognosis is considered as intermediate risk.2,3

An important determination to make is whether the patient has M3 type (acute promyelocytic leukemia [APL]). This type has a very specific treatment associated with it. Due to a translocation in chromosomes 15 and 17, the chromosomal abnormality t(15;17), APL is uniquely responsive to the agent all-trans retinoic acid (tretinoin [Vesanoid]).6,7 Prior to this product’s use, patients often succumbed to disseminated intravascular coagulation (DIC) during induction chemotherapy. More recently, a very good outcome has been achieved when treating this leukemia with arsenic trioxide (Trisenox), an arsenic derivative.

APL treatment is unique due to its the molecular traits, whereas the approach for the remaining forms of AML is quite homogenous.5,6 Not much has changed over the past two decades in regard to treatment methods for AML. The treatment regimen uses cytarabine (Ara-C; Cytosar-U, Depocyt) as a base combined with an anthracycline (daunorubicin or idarubicin [Idamycin PFS, generics]). The anthracycline used is based primarily on professional preference and clinical outcome. The usual cycle is cytarabine for 7 days and the anthracycline for 3 days; hence, it is referred to as the 7/3 regimen.8,9

Typically, remission is achieved in more than half of patients who receive treatment for AML. This remission, however, is often short-lived unless consolidation treatment or, in cases in which high doses of cytarabine are administered, intensification is given. Usually a series of four to eight cycles of the previous medication, most often cytarabine, is administered and at higher doses to lengthen the duration of remission. Unfortunately, relapse eventually occurs in most patients and they succumb to their leukemia.2,3,8 This is often due to limited treatment options, especially in older patients. If cytogenetic tests indicate an extremely poor prognosis or when relapse occurs, stem cell transplant from a histocompatible (HLA-matched) or a matched unrelated donor is considered. However, stem cell transplantation is not an option for many patients with AML because of their age and comorbidities. It is generally reserved for relatively young and otherwise healthy patients.

Clinical interest is increasingly directed toward foregoing the traditional cytarabine/anthracycline regimen in older patients with AML in favor of using hypomethylating agents, which are often used to treat myelodysplastic syndromes. Decitabine (Dacogen) and azacitidine (Vidaza) have been used in these patients with similar success and less toxicity compared with more aggressive treatments used in younger patients.2,9,10 Unfortunately, not many advances have been made in conventional therapies for AML. A previously available drug, gemtuzumab ozogamicin (Myelotarg), was discontinued because toxicity-related issues outweighed its benefits. This monoclonal antibody targeted CD-33-expressing myeloid precursors and was indicated for older patients after relapse. The drug was also very effective in relapsed APL.7,11