How are drugs classified as  controlled substances?

Medications are deemed controlled substances by the US Attorney General, based on recommendations from the FDA and Secretary of the Department of Health and Human Services. The decision involves two primary considerations: whether use of the drug may lead to physical or psychological dependence, and whether the drug has an acceptable medical use. Assessment of these factors includes many aspects, such as scientific knowledge of the compound, potential for abuse or dependence, significance of abuse or dependence, public health risks, and if the drug is an immediate precursor for a controlled substance. Medications are defined within five levels of control, also known as schedules.

Schedule I High abuse potential; has no accepted medical use (eg, heroin)

The classification of a medication as a controlled substance, and its schedule, can change over time. For example, a medication that was initially not considered a controlled substance may be reclassified if concern for its abuse potential increases. One recent example of this is the skeletal muscle relaxant carisoprodol (Soma), which was not previously considered a controlled substance. After an extensive data collection and review period that included clinical data, law enforcement testimony, and drug use patterns, the FDA concluded that dependence and abuse may occur. Carisoprodol was reclassified as a Schedule IV drug.

The Drug Enforcement Administration (DEA) sponsors Prescription Drug Take-Back events each year. In 2012, these events collected more than  244 tons of prescription medications. The next event is scheduled for Saturday, April 27, 2013. Go to  www.deadiversion.usdoj.gov/drug_ disposal/takeback/ on April 1 to find a collection site near you.  ONA

From the February 01, 2013 Issue of Oncology Nurse Advisor 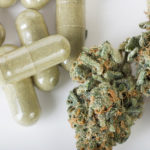 Concurrent Use of Cannabis May Reduce Efficacy of Immune Checkpoint Inhibitors