Up to 80% of patients sustain a greater tuberosity fracture or rotator cuff tear and as many as 60% of patients have some degree of neurologic compromise, with an axillary nerve palsy being the most common. Luxatio erecta occurs more frequently in men with reported rates of 10:1, male:female. These injuries are almost always treated successfully by closed reduction with low rates of recurrent instability and an overall good long term prognosis.

Patients will typically present after a high energy mechanism such as a fall from height, pedestrian struck accident, or motor vehicle collision. However, low energy falls causing inferior dislocations have been reported as well. Dislocation usually occurs indirectly as a hyperabduction force levers the proximal humerus against the acromion and ultimately out of the glenoid leaving the head to settle in the infraglenoid region, held in place by the pectoralis major. Less commonly, a direct axial load to an abducted extremity causes the humeral head to be driven through the inferior capsule leading to dislocation.

Patients will present with their arm abducted at the shoulder (about 130 degrees), flexed at the elbow (about 90 degrees), pronated at the forearm, and their hand usually resting behind or on their head. The shoulder is fixed in this position and any attempts at movement will elicit complaints of pain. Patients may complain of paresthesias and less frequently, inability to move the wrist or hand in addition to their shoulder, possibly representing a brachial plexopathy.

Patients with luxatio erecta have a classic appearance: an abducted shoulder with a flexed elbow and pronated forearm, leaving the arm held overhead. The deformity of the shoulder is described as a “squared appearance” as the acromion is prominent with a subacromial sulcus laterally. The skin must always be examined as there have been case reports of open injuries. On exam, the humeral head is palpable in the axilla. Depending on neurologic involvement, there may be decreased sensation over the axillary, radial, ulnar, musculocutaneous nerve distributions, or more globally, reflecting a brachial plexus type of injury.

Infrequently, if there is vascular compromise, distal pulses may be diminished or even absent and the skin may be cool or mottled. If after closed reduction, vascular insufficiency is suspected, a Doppler exam should be performed. If still inconclusive, arteriography may be indicated.

Imaging begins first with plain films and should include a shoulder trauma series including anteroposterior (AP), scapular-Y lateral, and axillary views of the affected shoulder. On AP, the humeral head will be inferior to the glenoid and the humeral shaft is pointing upward parallel with the scapular spine (Figure 1). On the axillary view, the humeral head and glenoid will be seen overlapping. When fractures are evident on plain films, a CT may be indicated to further assess fracture morphology

MRIs performed post-reduction have shown several common findings including: rotator cuff tears, injuries to the glenoid labrum (tears of the anteroinferior, posterior, and/or superior labrum), injuries to both the anterior and posterior bands of the inferior glenohumeral ligament (IGHL), and bone bruises or impaction fractures at the superolateral aspect of the humeral head.

The vast majority of cases of luxatio erecta will be successfully managed with closed reduction and post-reduction immobilization. Prior to reduction, a thorough and documented neurovascular exam is essential. Two methods of reduction have been described: A) traction-countertraction and B) the two-step maneuver. All reductions should be performed after the patient is adequately sedated. In contrast to reductions of anterior dislocations, the reduction maneuver often requires heavy sedation and narcotic analgesia.

The traction/counter-traction method is performed as follows:

Though rare, given the high incidence of concurrent injuries, associated injuries may need to be surgically treated. Please refer to the appropriate section of this text regarding those injuries.

Cases of an irreducible inferior dislocation in the emergency room setting usually occur secondary to the humeral head buttonholing through the inferior capsule. Reports of other structures such as the biceps tendon and the axillary nerve preventing reduction have also been reported. The patient may be brought to the operating room for general anesthesia and a repeat attempt at closed reduction. If the dislocation is still irreducible, or in cases of open dislocations, an open reduction is indicated. We prefer set-up using a beach chair position, and a reduction utilizing a deltopectoral approach. Alternatively, one can use a strap incision to utilize both the deltopectoral interval, and if necessary, a deltoid-splitting interval.

Set up for beach chair positioning is as follows:

After usual sterile preparation of the operative extremity, a deltopectoral approach is used:

Pearls and Pitfalls of Technique

After 2 weeks, physical therapy with passive range of motion exercises is started. After 6 weeks the patient will begin a rotator cuff strengthening program.

Patel, DN, Zuckerman, JD. “Luxatio erecta: case series with review of diagnostic and management principles”. Am J of Orthopedics. vol. 40. 2011. pp. 566-570. (A Series of 11 patients with luxatio erecta, mean age of 44.8 with a ratio of 10:1 male:female. All cases had at least one concomitant injury and were all reduced under location anesthesia or sedation. All patients reported immediate relief after reduction. Before reduction, 9 out of 11 patients were neurovascularly intact and at final follow-up, all patient reported normal motor and sensation. Motion limitations at final follow up (16.3 months) were in abduction (mean 88 degress) and external rotation (mean 60 degrees).

Frank, MA, Laratta, JL, Tan, V. “Irreducible luxatio erecta humeri caused by an aberrant position of the axillary nerve”. JSES. vol. 21. 2012. pp. e6-e9. (Study of a 57-year-old man with luxatio erecta, and ipsilateral both bones fracture, and compartment syndrome of the forearm. The patient failed a trial of closed reduction and emergently went to the operating room for decompression of compartment syndrome and both bones forearm fracture open reduction-internal fixation surgery (ORIF). Intra-operatively, it was found that the axillary nerve was preventing reduction of the shoulder and had to be repositioned before adequate reduction was possible. Ultimately, open reduction and repair of a RTC tear and biceps tenodesis was successful. At 9 months, active and passive range of motion were equal although limited and motor strength in axillary distribution was 4+/5.

Imerci, A, Golcuk, Y. “Inferior glenohumeral dislocation (luxatio erecta humeri): reports of six cases and review of the literature”. Turkish Journal of Trauma and Emergency Surgery. vol. 19. 2013. pp. 41-44. (Case series of six patients with luxatio erecta with a mean age of 45 years with a 4:2 male:female ratio. All cases were treated with closed reduction and followed for a mean of 32 months. The mean constant score was 94 (range 86-100) at an average of 2 years post-dislocation.)

Groh, GI, Wirth, MA. “Results of treatment of luxatio erecta”. J Shoulder and Elbow Surg. vol. 19. 2010. pp. 423-426. (Case series of 18 patients (20 shoulders) with luxatio erecta with an average age of 31 years and a 13:3 male:female ratio. Average follow up was 9 years. Eight out of eighteen patients presented with a nerve injury, six involving the axillary nerve. All neurological impairment resolved within 1 day to 6 months. Seven patients presented with vascular changes and all patients had complete resolution of vascular changes after reduction. Three patients underwent arthrography and two out of three of them had RTC tear. Only nine patients were successfully treated with closed reduction alone. The remaining nine patients required additional procedures for recurrent instability or humeral head fractures. Thirteen out of sixteen patients at final follow up had good to excellent University of California Los Angeles (UCLA) scores and overall mean UCLA score was 31 (range 26-35). All patients demonstrated >140 degrees of active elevation and all were satisfied with treatment.)

Garrigues, GE, Nagda, SH. “Open Luxatio erecta: a case report and literature review”. JOT. vol. 25. 2011. pp. e34-e37. (A 42 year old man presented with an open inferior shoulder dislocation who underwent emergent irrigation and debridement and reduction and was placed on antibiotics. After 72 hours, the patient underwent RTC repair and biceps tenodesis, but not capsular repair to minimize the chance of stiffness. At 15 months, his constant score was 90/100 and he had a UCLA score of 34/35 and at 30 months he was pain free with full strength. The patient was found to have avascular necrosis (AVN) at the superolateral aspect of the humeral head which did not seem to influence outcome.)

Luxatio erecta is a rare type of glenohumeral dislocation. The vast majority of cases may be treated with closed reduction alone, but infrequently, some may require an open procedure. Neurovascular complications may occur but usually resolve by 6 months. Careful clinical and radiographic evaluation and a high index of suspicion for associated injuries is paramount. Despite associated injuries, the long-term results of treatment of luxatio erecta appear to be good.

Powered By Decision Support in Medicine.
Jump to Section
Next post in Shoulder and Elbow 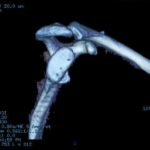