Stiff skin syndrome is a peculiar condition with sclerodermoid changes, which was described in 1971 by Esterly and McKusic. Skin changes have an early onset in infancy, even from the time of birth, and are characterized by stony-hard skin induration, which is strongly bound, adherent to the deeper underlying tissues. Cases could be localized or may have large areas affected, they may be sporadic, but around 40% are familial.

A condition described as familial progressive scleroderma could be a clinical variant. Another possible variant was described and named congenital fascial dystrophy. In this case, fascial thickening is observed with important limb contraction and mobility limitation. Hypertrichosis may be associated in the half of cases and helps to establish the diagnosis.

The most common localizations are the thighs and buttocks, although cases in the shoulders were also reported (Figure 1, Figure 2). The condition could be considered as an localized mucopolysaccharidosis without urinary excretion of mucopolysaccharides. The only extracutaneous manifestation is joint mobility restriction, which is secondary to the skin changes. It could be strong enough to impair normal ambulation. Ventilatory limitation was described in cases with thoracic involvement.

There is no visceral involvement nor any serologic abnormalities. Patients do not show dysmorphic traits and have a normal face. Acrosclerosis is not found, which may help to exclude scleroderma, a difficult differential diagnosis.

Risk factors are not known. Genetic predisposition is possible in affected families. In some families an autosomal dominant inheritance was reported.

Mutations in the FBN1 gene, which encodes fibrillin-1, a protein involved in elastic fiber assembly, were reported. These mutations could lead to altered cell-matrix interactions and to fibrotic changes.

Light microscopy shows dermal thickening with abundant collagen with increased cellularity (Figure 3, Figure 4). Important inflammation or vessel changes are not seen. Deposition of mucopolysaccharides could be demonstrated with proper staining. Transmission electron microscopy of congenital fascial dystrophy revealed giant fibrils in the affected fascia. Myofibroblasts were demonstrated in the lesions. Complications are due to skin induration, such as limited mobility, ambulation restriction, and respiratory impairment.

Complications are due to skin induration, such as limited mobility and ambulation restriction and respiratory impairment.

Physiotherapeutic exercises to improve skin induration and joint mobility limitation. Systemic steroids were used but there is no consensus about their efficacy.

The condition has a good prognosis, since there is no visceral involvement. Working with physical therapy is essential for this disrorder.

Respiratory complications such as pneumonia and respiratory insufficiency in cases with thoracic involvement. 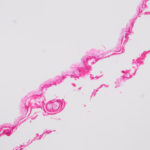