(HealthDay News) — Stress and damage caused by walking or running could be a risk factor for melanoma on the soles of the feet, according to a research letter published in the June 16 issue of the New England Journal of Medicine.

Ryuhei Okuyama, M.D., Ph.D., a professor of dermatology at the Shinshu University School of Medicine in Matsumoto, Japan, and colleagues reviewed medical data between January 1990 and December 2014 for 123 patients at Shinshu University Hospital who had been diagnosed with melanoma on the soles of their feet. The average age of patients diagnosed with melanoma on their feet was 73.5 years.

Charting the location of the melanomas, the researchers found they most often occurred on locations where pressure is regularly placed on the sole. Only a couple of cases occurred in the arch, which receives little direct pressure while walking. When diagnosed, many already had advanced melanoma, the researchers noted.

“Our clinical observation suggests that mechanical stress — such as plantar pressure and shear stress — is involved in the development of melanoma on the sole,” Okuyama told HealthDay. “In our view, a foot check should be considered as a part of skin cancer exam, especially in elder persons. Lesions on the sole are hardly noticed in daily life.” 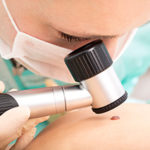