Though white, female college students in Indiana who tanned indoors were aware of the risks of developing skin cancer and premature aging of the skin, these women mostly continued to tan.1

A self-administered questionnaire of 629 female undergraduate and graduate students between age 18 and 30 years at Indiana University’s Bloomington and Indianapolis campuses conducted in 2016 collected information regarding indoor tanning habits and attitudes about tanning.

Exposure to ultraviolet light is a well-established risk factor for the development of skin cancer and premature aging of the skin. Such exposure is particularly dangerous for younger people and people who frequently undergo indoor tanning. Indoor tanning, however, remains popular in the United States and is at the highest prevalence in the Midwest.

The questionnaire asked participants to agree, disagree, or indicate they had no opinion to a variety of different statements. According to the results, 99.4% of respondents agreed that tanning can cause skin problems such as skin cancer and premature aging of the skin.

In total, 78.7% of respondents disagreed that indoor tanning is safe or at least safer than outdoor tanning, 69.1% agreed they like to get a tan even with the knowledge that tanning might be bad for their skin, 83.6% agreed that a tan makes them feel more attractive, and 83% agreed that they feel more relaxed and pleasant during tanning.

Respondents more likely to use indoor tanning were females who viewed a tan as attractive, tanned easily, believed tanning could stimulate healthy vitamin D production, and/or had families or friends who used indoor tanning.A higher proportion of women who tan indoors or had in the past reported that tanning made them feel more relaxed and pleasant. These results suggest possible addictive behaviors.

“Future research could focus more on tanning addiction, and ongoing surveillance would provide monitoring of the impact of current policies on reducing tanning device use and skin cancer prevention,” concluded the authors. 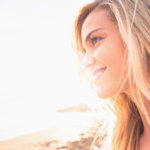 Beach Umbrella Not Enough for Protection from UV Rays