Brain metastases are common in patients with primary cardiac sarcoma, and location of the sarcoma on the heart is associated with disease histology, as well as the likelihood of developing brain metastases. The results of this study were published in Sarcoma.

In the overall group of patients, tumor location was fairly equally divided between the right (41%) and left sides of the heart (46%), with most of the remaining tumors occurring in the pericardium (13%). The most common disease histologies were angiosarcoma (36%), high-grade undifferentiated pleomorphic sarcoma (UPS; 26%), and leiomyosarcoma (13%). Interestingly, angiosarcomas were more likely to be found on the right side of the heart, while UPS and leiomyosarcomas were more commonly located on the left side of the heart.

Almost half of patients (46%) had metastatic disease at the time of diagnosis. Although 10.6% of patients had brain metastases at diagnosis, nearly one-third of patients developed metastases to the brain at some point in their clinical course. Notably, the majority of brain metastases occurred in patients with left-sided tumors and were most commonly of UPS histology.

Nearly two-thirds of patients underwent surgical resection although an R0 resection was achieved in only 12%, all of whom had left-sided tumors. Radiation therapy to the primary tumor and the brain was administered to 7.7% and 20.5% of patients, respectively. Approximately 72% of patients received chemotherapy (eg, first-line doxorubicin plus ifosfamide or first- or second-line gemcitabine plus docetaxel), mostly in the postsurgical setting.

Limitations of this study include its retrospective design, as well as the possibility that patients receiving chemotherapy had better performance status and organ function.

“Based on our findings, we recommend brain imaging at the time of primary cardiac sarcoma diagnosis given the incidence of brain metastases. Furthermore, our results suggest a role for aggressive multimodal therapy including resection and systemic therapy, even in the metastatic setting, to improve outcomes,” the researchers concluded. 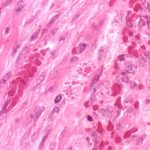 Risk of Kaposi Sarcoma Supported by Its Evolving Clinicopathologic Characteristics